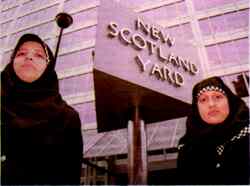 In London, Police Chief Ian Blair is making sure Muslims are well-represented in the ranks of the police force by cooperating with the wishes of a police organization which doesn't seem to be interested in policing. (Thanks to Religion of Pieces for sending this in to us.)

The Metropolitan Police Department's descent into dhimmitude began two months prior to 9/11, when working with the Association of Muslim Police a decidedly Islamist police union, the force began recruiting hijab-clad officers.

The Muslim Police officers union's goals are to proselytize for Islam [Da'wa] within the force while resisting assimilation, below from their website:

Note that in this manifest there is no mention, recognition or committment to what are normally thought to be the primary goals of law enforcement and certainly no mention of helping to protect the UK from further terrorist activity.

The initiative which was announced at a conference "Protect and Respect - Everybody's Benefit" for the first time allowed women recruits to wear headscarves and ankle length gowns.

Additionally the agreement permitted Muslim cops to pray while on duty, demand halal food and have altered meal schedules during the month of Ramadan.

Four years later, the 300 Muslim officers were not enough for the Metropolitan Police Chief Ian Blair, who stated that, "more Muslim police officers were needed in London to reflect the city's population" and that he wanted "as many as he could get."

Blair has spoken in support for restraining the number of stops and searches among the city's 700,000 Muslims to "less then 10 times per day." This number is still deemed too high among the radicalized population.

Ostensibly the idea of having more Muslim police, would mean that they could be used to handle cases involving their own community. However it seems clear that the true purpose of the constant agitation for more Muslim officers is simply to create an even larger interior lobby within the force which will throw up constant roadblocks and question nearly every confrontation between Muslims and the non-Islamic community.

As proof of this, consider the head of the Muslim Council of Britain, Mohammed Abdul Bari, who denounced the arrest of 2 Muslim brothers whom he called "good boys." This despite the fact that both of them had a "very extensive police record," including charges against one of the brothers involving "possession of a prohibited weapon," a "noxious, liquid gas, said to be CS spray."

Muslim police superintendent Ali Desai concurred with Abdul Bari's assessment. He even appeared at a press conference supporting the brothers, even referring to them as "good lads."
Posted by Pastorius at 5:54:00 pm