The Acceptable Face of Holocaust Denial 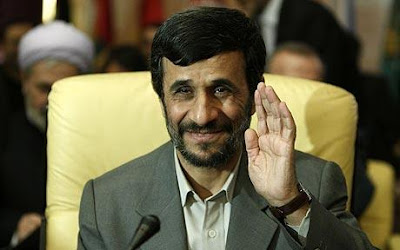 With all that concernment, consternation, dismay, sadness and shock about the pope and the Holocaust denier around, it was like a breeze of fresh air seeing ex-chancellor Gerhard "Gazprom" Schröder tackling the same problem with much more aplomb. John Rosenthal reports at NewMajority.com:

Former German Chancellor Gerhard Schröder used the occasion of his four day visit in Tehran last week to criticize Iranian Holocaust denial. “The Holocaust is a historical fact,” Schröder is reported to have said in a speech to the Iranian Chamber of Industry and Commerce, “and it makes no sense to deny this unparalleled crime.” This was perhaps intended as friendly advice, since Schröder evidently does not believe that the Iranian government’s Holocaust denial or its associated threats against Israel are any reason to curtail relations with Iran.

Schröder’s trip was ostensibly undertaken as a “private visit,” but it is known to have been coordinated with the German Foreign Ministry. While in Tehran, Schröder met with many of the public figures most closely connected to Iranian Holocaust denial: starting, of course, with President Mahmoud Ahmadinejad, who has declared outright that the Holocaust is a “myth.” The meeting was preceded by a warm handshake. (See here.) Schröder also met with Iranian Foreign Minister Manouchehr Mottaki and the Speaker of the Iranian Parliament Ali Larijani. In December 2005, in remarks reported by the Italian news service AKI, Mottaki described Ahmadinejad’s Holocaust denial as the official “view of the [Iranian] government.” If Europe is interested in having a dialogue with Iran, Mottaki was quoted as saying, “it has to learn to listen to our opinions and take them into account.” One year later, Mottaki gave the opening address at an international conference in Tehran that brought together some of the world’s most notorious Holocaust deniers on the invitation of the Iranian government.

As for Larijani, just three weeks ago – and at the Munich Security Conference of all places! – he again defended Iranian denial of the Holocaust, saying that there could be “different points of view” on the matter (source: Focus). A photographer of the German wire service dpa captured Larijani and German Foreign Minister Frank-Walter Steinmeier sharing a moment of apparently great mirth at a conference reception. Steinmeier is the Social Democratic candidate for chancellor in the upcoming German elections. He was previously one of Gerhard Schröder’s closest advisors as the head of the Office of the Chancellery from 1999 to 2005.

In June 2008, Larijani’s brother Mohammad, himself a former deputy foreign minister of Iran, sparked controversy in Germany by calling for the “end of the Zionist project” – a euphemism for the elimination of Israel – at a “Transatlantic Conference” in Berlin. The theme of the publicly-funded conference was the search for “common solutions” in the Middle East. Conference organizer Bernd Kubbig would subsequently defend his invitation of Larijani by noting that it was none other than the Foreign Ministry of Frank-Walter Steinmeier that had recommended Larijani to him (source: Financial Times Germany).

So Schröder met with a veritable Who's Who of Holocaust deniers and after some lukewarm mandatory statements from the Council of Jews in Germany it was all quickly forgotten while the concernment, consternation, dismay, sadness and shock about the pope and the Holocaust denier is still going strong. Chancellor Merkel, too, had no reproach in stock for predecessor Gerd's doings. He is, after all, not Catholic. John Rosenthal said that Schröder does evidently not believe that the Iranian government’s Holocaust denial or its associated threats against Israel are any reason to curtail relations with Iran. No, of course not. In fact, they are the REASON for those relations. When will people finally twig that the cussed "dialogue" with even the vilest Muslim thug has nothing to do with "tolerance" but is 1) the union between two totalitarian collective minds who share a deeply ingrained hatred for the Jewish people and 2) a way for the Germans to "prove" how open minded and multi-culturalist they have become when and while sucking up to the world's other Jew haters who might finish what they had to abandon 64 years ago. Even oil is a side issue, albeit a convenient one.

Cross-posted at Roncesvalles.
Posted by The_Editrix at 9:44:00 pm

I think you should be more open-minded about Iranian President Adminijihad. He may have a point.

(And to think, I wrote that with a straight face.)

It will be funny some day when the Iranian people have a revolution and lynch this guy -- we can then deny that it happened. :)

(Not that I'm advocating violence or anything like that.)

im hoping it wont go so easy for him.

im thinking more like burried up to his chest like some of the poor women this mysogenist c*****sucker has allowed to be murdered, and stoned slowly like they were.

I would like it that he suffered the same terror he inflicted.

Frankly, I do not put much trust in Iranian revolutions. Remember what the last one brought us?

Sadly, I think the Editrix is more than right to express such a doubt.