Islam gets a foothold right near the place where some 3,000 people were killed in the name of Allah on September 11, 2001. 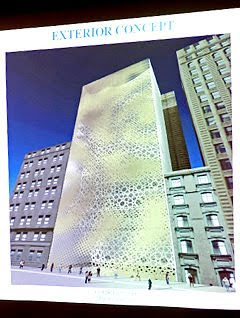 (NY Daily News) A proposal to build a mosque steps from Ground Zero received the support of a downtown committee despite some loved ones of 9/11 victims finding it offensive.

The 13-story mosque and Islamic cultural center was unanimously endorsed by the 12-member Community Board 1's financial district committee.

The $100 million project, called the Cordoba House, is proposed for the old Burlington Coat Factory building at Park Place and Broadway, just two blocks from the World Trade Center site.

"I think it will be a wonderful asset to the community," said committee Chairman Ro Sheffe.

Imam Feisel Abdul Rauf, who helped found the Cordoba Initiative following the 9/11 attacks, said the project is intended to foster better relations between the West and Muslims.

He said the glass-and-steel building would include a 500-seat performing arts venue, a swimming pool and a basketball court. "There's nothing like it," said Rauf, adding that facilities will be open to all New Yorkers.

Daisy Khan, executive director of the American Society for Muslim Advancement and a member of the Cordoba Initiative's board, said donations are being sought to pay for the construction.

Cordoba was the Seat of the Islamic Caliphate, and the location of the Grand Mosque.

This Mosque is named after the Seat of the Caliphate for a reason. I'm quite sure this "Ro Scheffe" shithead doesn't even know the fucking history.

Tthe dumb bitch who would sign away Western Civilization for a few beads of PC feel-goodiness.
Posted by Pastorius at 3:45:00 am

Ignorance on a massive scale!
How can this blindness be explained? It is beyond normal credibility that Mohammedanism can hide itself so successfully as the wicked fruits of it's works are clear for anyone and everyone to see worldwide! Even just a surface investigation into it's sacred writings and or the life of it's adored perfect pedophile profit will suffice.

I don't know about everyone else, but the spiritual aspect to this all is undeniable to me.

I would think that this would even make an atheist consider a spiritual side to all this, buts that's just my opinion.

the dumb are getting dumber by the minute---and---they are endangering us in the US...

Another sad thought is that this abomination will probably be finished before anything is done at ground zero!!!!

Ha,ha,ha the effin joke is on us.

(*)
A waqf (Arabic: وقف‎, pronounced [ˈwæqf]; plural Arabic: أوقاف‎, awqāf; Turkish: vakıf) is an inalienable religious endowment in Islamic law, typically denoting a building or plot of land for Muslim religious or charitable purposes. It is conceptually similar to the common law trust, which many believe to have been influenced by the waqf.

America has no shame, do they. If a new WTC is ever built (and who knows when or if that will happen to spite the billions already plowed into the project), the shadow will fall on a frigging mosque.

No doubt the mosque will be erected in under a year.

I read this on Logan's Warning. And, I'm just almost defeated. If you even read the major anti-Islam web sites, you will note that there is just a handful of people, out of a nation of a third of a billion, that even comment on these sites. I live in Appalachia and I can go to the store and see these shrouded women shopping the aisles while their male watchkeepers stand at the end of the aisle, and I'm just sickened. They are even out here in Applachia!!! So when a committe in NYC would agree to allow the building of a fucking Islamic hate speak next to the hallowed ground of the biggest mass murder attack in our nation's history committed by Muslims that continue to attack us and affront our customs and sensibilities on a daily basis, and no one, NO ONE speaks out, I'm just in shock. I'm in shock. This is such an insult to injury. And it is even more insulting that you have Americans who are handing these people our country on a silver plater and even apologizing for them. I'm numb. I'm just numb. It is surreal. It is just too surreal.

“The mosques are our barracks, the domes our helmets, the minarets our bayonets and the faithful our soldiers…”

The poem that landed Erdogan in jail.

Cjk, we atheists are actually soulless evil robots sent by the galactic emperor Zhoul to take over your planet. Hope that clears things up.

"Cordoba" House should have set off alarms, people. As in Spain-is-really-ours-you-dirty-kuffar-and-we-will-have-it-back-inshallasshole. Same thing the "Latinos" are trying to do with our southwestern states, only with the added attraction of Sharia law and beheadings.

Same thing the "Latinos" are trying with our Western states though at least they don't come
I read about this months ago but assumed that there would be
protests and such before anything was actually decided. Now there's nothing left to do but go all EDL on 'em. Pass the bacon.

When I used to read histories of the 1930's I always wondered how people could be so STUPID.

The will to avoid the bitter reality and be forced to act is more powerful than knowing what is right and being compelled to action.

If "Islam" was as sensitive as they display when cartoons appear, NO MUSLIM WOULD DREAM of locating a mosque where this one is going. More there would be visible, internal disputes in congregations with a lot of yelling and screaming over whether this is proper.
Islam is no monolith.
Is there any internal dispute?

On my blog, I've been called an "utter shallow profiling racist" for pointing out how disgusting this provocation is. One even suggested I go slit my wrists.

In my disgust, I hadn't even noticed the name of the project -- thank you for pointing that out.

I'm with Mighty Like a Rose, I feel almost defeated. More and more, I'm feeling (like one of my commenters said) that there is a 5th column at work, and they have teamed up with the Islamists.

As far as your wrists are concerned, well, on the left one, put a " Patek Philippe " watch and on right, a 20 carat diamond bracelet!!

Leave it to me Natasha! My cigarette ashtray is full!

This is nothing less than defiling the very site of death and destruction with a 13-story reminder of who and what did it.

It's salt on a wound.

My first thought, after utter disbelief and disgust, mirrors Epaminondas. Muslims claim such sensitivity and are so readily offended at perceived affronts to their religion, yet they have the temerity to plunk down a giant mosque at the heart of America's hallowed ground, the site of an Islamic terror attack? Yet if Americans stand up and voice our offense, we will be branded 'racist' not only by CAIR and Muslim apologists, but by many fellow Americans who are blind to reality. Absolutely shameful.

RRA,
"Cordoba" House should have set off alarms, people. As in Spain-is-really-ours-you-dirty-kuffar-and-we-will-have-it-back-inshallasshole.

They are laying claim to America.

'Cjk, we atheists are actually soulless evil robots sent by the galactic emperor Zhoul to take over your planet. Hope that clears things up.'
If these events just bounce off your noggin then maybe you are from another planet.

it makes me heartsick.

if you had told me this was possible or the memorial to the crashed plane of sept 11 being a crescent pointing towards mecca or any of the other ludicrous and outragous things going on that bow towards islam just after 911 I would have told you only in an alternate universe lacking common sense could these things happen.

Let's fly a plane into it.

I wish they'd build one closer to my house though.

Oh, this story just gets better and better . . .according to Creeping Sharia, they plan on breaking ground on the anniversary of 9/11.
http://creepingsharia.wordpress.com/2010/05/07/muslims-planning-ground-zero-mosque-groundbreaking-to-coincide-with-911-anniversary/

Creeping Sharia seems to have no source for that information.

Do you know of a source for it?