With a hat tip to Bob Mack of Be Sure You're RIGHT, Then Go Ahead: 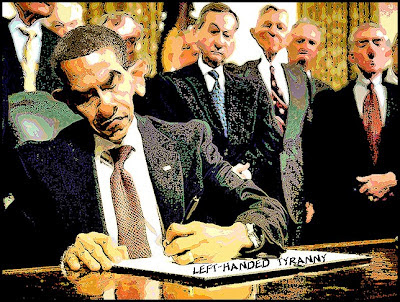 Democracy is always only skin deep with this bunch. Progressives, Liberals, Socialists … it doesn’t really matter what they’re called, or what fashionable appellation they’re currently using in an attempt to hide the un-American malevolence of their true natures — scratch a Democrat and you’ll find a velvet-gloved tyrant. The latest bit of evidence, as if any more was needed, has been provided by Senator Dick Durbin...

Let us pay particular attention to the following, linked to in Bob's post:


Allies Urge Barack Obama to Go It Alone on Causes

Important parts of President Barack Obama’s political coalition — Hispanics, the gay and lesbian community, and women — are looking to the White House to act on its own via executive order given that their issues are going nowhere in Congress.

The White House so far has resisted executive orders on the DREAM Act and discrimination by federal contractors as it continues, publicly at least, to push for legislation that appears doomed.

But Obama’s allies on Capitol Hill suggest it’s time to reconsider that cautious approach — and they say the White House is taking another look.

“You’d have to say that the last year and a half of tea party dominance in the House has been a very unproductive period, and they’ve been unwilling to take and even consider some of these issues, so I can understand the frustration of many people on the outside and the dilemma facing the White House,” Senate Majority Whip Dick Durbin (D-Ill.) said. “I wouldn’t rule it out. ... The president needs to consider taking action by executive order when Congress will not respond to a major national challenge.”

Durbin said the White House is actively looking at preventing deportations of people who would be subject to the DREAM Act, for example.

“It’s being researched by legal counsel, I know that, in the White House and outside,” Durbin said. “I know they’re going through this calculation right now, weighing this and deciding whether to move with the executive order.”

The DREAM Act, which Durbin has championed in the Senate, would provide a path to citizenship for illegal immigrant children who go to college or join the military.

Durbin acknowledged that an order wouldn’t come without risks.

“You could get a political backlash with an executive order. ... I’m sure there’s a calculation,” he said. “But I’d have to say, in all fairness, we’ve gone a year and a half without a serious overture on DREAM other than Sen. [Marco] Rubio [R-Fla.]. ... There comes a point again where you’ve just got to say that there’s an awful lot of vulnerable people out there.”
Although those affected would still face some legal uncertainty should a new president rescind the order, they are subject to deportation now, Durbin noted.

And a new president would be faced with a new status quo — one where people have been granted protection.

“I think there’s more pressure for him to continue that protection,” Durbin said.

Gay rights groups, meanwhile, have been pressing the Obama administration for an order banning LGBT discrimination by federal contractors. And there have also been rumblings about an executive order applying pieces of the filibustered pay equity bill to contractors as well. So far, the White House has resisted.

Press Secretary Jay Carney has faced repeated questioning on the LGBT executive order, including after Exxon Mobil Corp. shareholders recently rejected anti-discrimination protections for its workers. He said the White House remains focused on a legislative strategy to pass the Employment Non-Discrimination Act. Carney repeatedly pointed to the success of repealing “don’t ask, don’t tell,” which happened in the 2010 lame-duck session after the White House resisted calls for executive orders. Advocates, however, have noted that the DADT repeal happened when the president enjoyed big majorities in both chambers. ENDA, on the other hand, is going nowhere in the current divided Congress.

They contend that, in the meantime, Obama could take an important step to ban discrimination by contractors, which include numerous major businesses from coast to coast.

And before last week’s vote on the pay equity bill, senior Obama adviser Valerie Jarrett rejected consideration of an executive order on pay equity on a conference call with reporters.

“Our efforts right now are devoted to getting this act passed,” she said then. “There is no interest right now in talking about a fallback.”

The strategy has been a contrast to the “We Can’t Wait” campaign on economic issues, where Obama has announced numerous executive initiatives aimed at creating jobs. But the White House has been somewhat more cautious when it comes to executive orders on social issues. That’s not to say that it hasn’t issued any — indeed, protecting the president’s executive orders has been a priority of the White House as it fights GOP policy riders during the annual spending bills.

Several liberal lawmakers, however, say Obama would help his constituencies by acting more on his own.

“Slow isn’t working,” said Rep. Lynn Woolsey (D-Calif.), a liberal who has long complained of a too-cautious White House. “These groups need to know that there is support for them. The time for not ruffling feathers is past. It’s not worked. It’s time to ruffle feathers and show the people that support this White House that he supports them.”

Rep. Keith Ellison (D-Minn.), co-chairman of the Congressional Progressive Caucus, said, “We would far prefer that they move forward and vindicate people’s rights as soon as possible.” He noted that when Obama came out for marriage equality, it helped, not hurt, and that his base would like to see more.

“You can have tepid support or you can have enthusiastic support, and we can use all we can,” Ellison said.

It’s not a question of progressives voting for presumptive GOP presidential nominee Mitt Romney, it’s a question of them voting at all, advocates of a more aggressive White House said.

Rep. Charlie Gonzalez (D-Texas), chairman of the Congressional Hispanic Caucus, said the White House has been wrestling with the CHC over whether it has the legal authority to stop deportations of people affected by the DREAM Act for nearly two years. Already, Obama has asked immigration authorities to prioritize deportations of illegal immigrants who have committed other, more dangerous crimes. Still, potential DREAM Act beneficiaries continue to be deported.

Obama shouldn’t wait to act, Gonzalez said, if the administration determines it has the authority.

“The White House has to recognize that this Congress, in this election year, is basically frozen,” he said. “The executive order would be more like an emergency room physician who would simply deal with the most pressing issue right now knowing there will have to be follow-up later. ... He has nothing to lose, and the DREAM kids have everything to gain.”

Rep. Luis Gutierrez (D-Ill.) reiterated his push for an order with an item on the Huffington Post last week following a New York Times editorial pushing the executive order. And almost 100 law professors signed a letter to the White House asserting that the president has the authority to issue the order.

Rubio told Roll Call that he’s not sure whether the executive order would help or hurt his efforts to line up Republican votes for the compromise legislation that he is drafting. But he said he would prefer the legislative route.

Democrats, however, have been largely skeptical that Rubio can deliver a product that will both be worthy of their support and get Republicans and Romney on board.

The drumbeat for an executive order will only grow louder as Obama faces a tough re-election fight — and one where he will need Hispanic voters to put him over the top.

The White House remained noncommital last week. “The President is deeply committed to doing all he can to improve people’s lives and ensuring that Congress fulfills its responsibilities to act on measures important to millions of Americans,” a senior administration official said.