In response to Finke: Michelle at Oscars 'unnecessary and inappropriate':
According to Clear Channel’s Steven Gregory on Twitter: 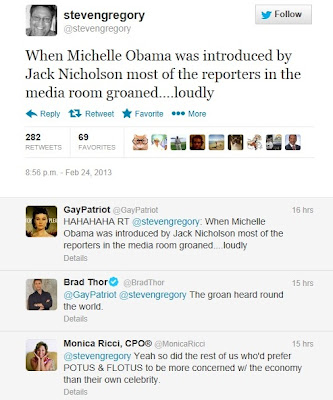 Obama fatigue - it's not just for righties anymore.


It was the average too-long, unfunny, over-produced Academy Awards TV show and then, after suffering through the 10-hour (well, it seemed like it) show, there was the first lady. In a ball gown. With military service personnel in dress uniform behind her.

Michelle Obama, with service members behind her, announcing the winner of the Best Picture Academy Award (Mario Anzuoni / Reuters)

She declared of the Best Picture nominees, “They reminded us that we can overcome any obstacle if we dig deep enough and fight hard enough and find the courage within ourselves.” Alas, none of the films nor her aides reminded her to mention the military, not those personnel behind her nor those serving overseas, an odd omission for the White House that nevertheless was pleased to have them arrayed behind her like, well, set decoration.

She did have time to give a crumb to the gay community, applauding the movies that inspire us ”no matter who we are or what we look like or who we love,” adding that “they are especially important for our young people.” (Except when they contain gruesome violence, traffic in stereotypes or use gratuitous profanity, I guess.) Real heroes, such as our servicemen and servicewomen, inspire us, too, I would think.

It is not enough that President Obama pops up at every sporting event in the nation. Now the first lady feels entitled, with military personnel as props, to intrude on other forms of entertaining (this time for the benefit of the Hollywood glitterati who so lavishly paid for her husband’s election). I’m sure the left will holler that once again conservatives are being grouchy and have it in for the Obamas. Seriously, if they really had their president’s interests at heart, they’d steer away from encouraging these celebrity appearances. It makes both the president and the first lady seem small and grasping. In this case, it was just downright weird.

No one, it seems, gets within a mile of the White House with any sense of restraint. No one there would dare suggest nearly half the country didn’t vote for him and doesn’t much like him and might want to be left to their small daily pleasures. (Greta Garbo said it best.) And no one there is apt to explain that the White House, the military and the first lady (not this one in particular) are institutions bigger than the Obamas and their e-mail list.

Still, it would have been grand if the lefty-maligned “Zero Dark Thirty” (which showed the nasty interrogation techniques her husband deplored) had won Best Picture. Unfortunately, that sort of perfect karma happens only in the movies.
Posted by midnight rider at 9:20:00 pm

Charles,
I thought the same thing.

God, I so don't fucking care about the oscars and I'm glad I didn't watch it. Especially hearing this shit.