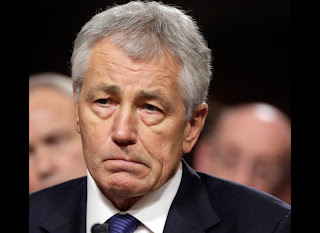 In Related News: Upon hearing his secret had been revealed, Chuck Hagel promptly stroked out and began babbling, "Save me, Uncle Adolf."
Good-night, Chuck.
No wonder they were hiding this —
Controversial Obama nominee Chuck Hagel told a Rutgers audience in 2010 that Israel was“becoming an apartheid state” and accused Hagel of violating UN resolutions.
CLICK ON THE TITLE TO READ THE WHOLE STORY.
Posted by Pastorius at 7:58:00 pm