Students made to wear burqas – in Texas Muslim garb taught as alternative dress – not oppressive to womenWorld Net Daily, February 25 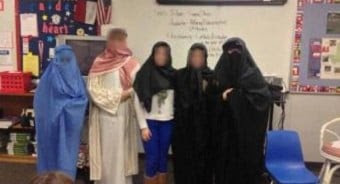 There’s a new controversy in Texas involving the online public school curriculum called CSCOPE, which already has been the subject of heated debate and state legislative hearings.
There are reports now that students were made to wear Muslim burqas as part of their public school lessons.
CSCOPE has been facing criticism over its alleged Islamic and anti-American bias. It is a “curriculum management system” now used in 80 percent of Texas classrooms. It recently was the subject of a heated inquiry that culminated in hearings conducted by the Texas Senate Education Committee chaired by state Sen. Dan Patrick, R-Houston.
According to a joint press release by Patrick, State Board of Education Chairwoman Barbara Cargill and CSCOPE representatives, CSCOPE ultimately agreed to “significant changes.” But it is unclear when the changes will take place and whether or not the pledged cooperation is legally binding or simply to mollify critics.
WND contacted Patrick’s office but has been unable to obtain documentation confirming whether CSCOPE compliance is required or optional.
He did release a statement: “Be assured we are working on this issue as is the SBOE almost every day. The hearing was step one, the letter step two. The only thing that is binding from a legislative standpoint is legislation. We are working on those issues based on what we are discovering now. We are doing our job, one that must be thorough and will take time.”
CSCOPE has come under fire for controversial curriculum content, including accusations of multiple lessons showing a pro-Islamic agenda. CSCOPE representatives had claimed that such content had been “taken out of context” or that they were “old lessons that have since been taken down.”
CSCOPE proponents have denied the existence of such lessons, or, when faced with documentation, have dismissed critics’ claims as exaggerations.
However, in Lumberton, Texas, this week, high school girls were made to wear burqas as part of a CSCOPE study of Islam.
One student quoted the teacher as saying, “We are going to work to change your perception of Islam.”
The teacher in the burqa lesson, according to a student, also said, “I do not necessarily agree with this, but I am supposed to teach you that we are not to call these people terrorists anymore, but freedom fighters.”
Critics argue that this should not be a teacher’s role, and are concerned that CSCOPE curriculum appears agenda-driven.
According to a student in the class, the lesson was to teach about the life of women in Islam. The burqa exercise focused on fashion and did not include the fact that in many Muslim communities, women who appear in public without a burqa face being beaten, imprisoned or murdered by family members, vigilante groups or even the state.
At the end of class, the students were assigned to write a paper about Egypt. According to one student, they were instructed to discuss “how Egypt was a good country until democracy took over, and that things were finally corrected when the Muslim Brotherhood came into power.”
Muslim women are portrayed as liberated in CSCOPE literature. In a lesson titled “Thinking About Sexuality” that utilizes a series of film clips, students are asked, “What do the women portrayed in these film clips think Islam teaches about sexuality? How are their thoughts similar or dissimilar to your own ideas about sexuality?”
Under the subheading “For further discussion,” select quotes from Muslim women are included for student reflection.
A women named Harlina Halizah says: “I don’t think it is fair to say that Islam restricts your sexual desire. It is more directing it toward a more purposeful kind of life.”
Halizah goes on to say, “I don’t need to be liberated. I was born a free person.”
Students are then asked: “Do you agree? What would you define as the criteria for being ‘liberated’?”
Another Muslim female prototype, Zainah Anwar, is quoted under the subheading “Thinking about Gender Relations.”
“We found that it is not Islam that discriminates against women, it is not the verses in the Quran, it is the way that these verses have been interpreted by men, living in patriarchal societies who wish to maintain their dominance, and their superiority and control over women.”
To get a better understanding, WND reached out to Mary Bowen. Bowen is a teacher of more than 30 years with a masters degree in curriculum who recently testified before the Senate Education Committee about CSCOPE’s academic deficiencies and its politically driven nature.
Commenting on a picture in the curriculum of smiling Muslim children, Bowen said, “I wonder if they have been taught that the women they are representing cannot drive, cannot be schooled, that they do not have legal birth records and if they are accused of rape/sexual impropriety their father can legally take them out on the patio and kill them like a dog without legal penalty.
“I just wonder if they are being taught the real story behind the burqa.”
CSCOPE has been heavily criticized by parents and teachers for other controversial content. One lesson from a CSCOPE social studies unit teaches students that communism is the highest attainable economic system and that capitalism is merely an evolutionary step on the ladder. The lesson calls communism a system in which “all people work together for everyone” It shows a man climbing stairs towards a communist pinnacle. Capitalism is defined as a system in which “all people strive to fulfill their own needs and wants” and is at the bottom of the included handout. 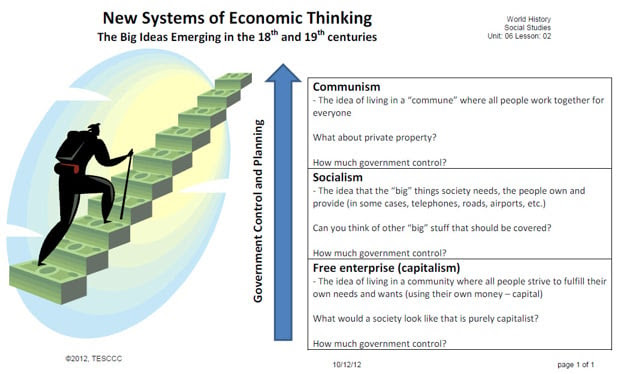 A civics unit defines political viewpoints and paradigms on a continuum. Fascism/Nazism are regarded as “conservative,” in spite of the fact that they dictate total state control and ownership of resources, while conservatism favors less government and wide economic and political freedom.
Republicans are defined as favoring “big business over labor unions.”
Democrats are defined this way: “Will spend more tax dollars on education to benefits [sic] each individual.”
CSCOPE oversight legislation is pending in the Texas House of Representatives and took less than a week to gain the full support of a majority of representatives.
In the meantime, teachers are legally required under CSCOPE contracts to teach only CSCOPE lessons and are not permitted to discuss content with parents and others in the community.

UPDATE: A Texas lawmaker is launching an investigation after a teacher reportedly invited female students to dress up in Islamic garb and then told her classroom they should call Muslim terrorists – freedom fighters.

State Sen. Dan Patrick, chairman of the senate education committee, told Fox News he is very disturbed by the photograph as well as reports that students were exposed to a story that blamed Egypt’s turmoil on democracy – rather than the Muslim Brotherhood.
“Parents are very sensitive to any issue that seems to be anti-American – that blames democracy for some sort of trouble in the world,” he said.

I'd have sent my kids in bathing suits