"WE WANT TO START A WAR IN LONDON TONIGHT" 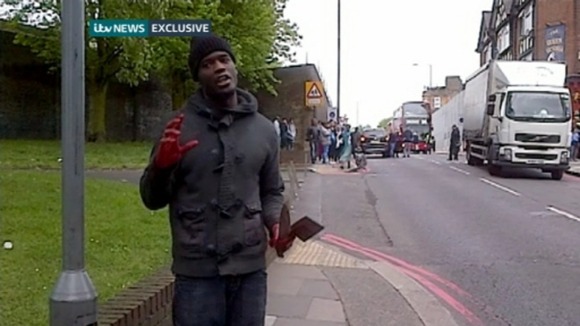 A mother-of-two described tonight how she put her own life on the line by trying to persuade the soldier’s murderers to hand over their weapons.Cub scout leader Ingrid Loyau-Kennett selflessly engaged the terrorists in conversation and kept her nerve as one of them told her: “We want to start a war in London tonight.”Mrs Loyau-Kennett, 48, from Cornwall, was one of the first people on the scene after the two Islamic extremists butchered a soldier in Woolwich, south east London.She was photographed by onlookers confronting one of the attackers who was holding a bloodied knife.He was in full control of his decisions and ready to everything he wanted to do.
I said 'right now it is only you versus many people, you are going to lose, what would you like to do?’ and he said I would like to stay and fight.”
The suspect in the black hat then went to speak to someone else and Mrs Loyau-Kennett tried to engage with the other man in the light coat.
She said: “The other one was much shier and I went to him and I said 'well, what about you? Would you like to give me what you have in your hands?’ I did not want to say weapons but I thought it was better having them aimed on one person like me rather than everybody there, children were starting to leave school as well.
Mrs Loyau-Kennett was not the only woman to show extraordinary courage. Others shielded the soldier’s body as the killers stood over them.
MPs praised the “extraordinary bravery” of the women and raised concerns about why it took armed police 20 minutes to arrive at the scene while people’s lives were at risk.
According to a security source the delay in the armed police response is “particularly surprising” because there is a heavily armed police presence at Woolwich Crown Court, which is just two and a half miles away.
Keith Vaz, the Labour chairman of the Home Affairs select committee, said: “We are all grateful for the local people who responded so quickly.
“I do want to pay tribute to them [members of the public] – I think what
they have done is extraordinarily brave and courageous.
“It shows the spirit of London that people are just not prepared to allow an attack of this kind. I pay tribute to what they have done.”
Patrick Mercer MP, a former army officer and former shadow counter terrorism minister, paid tribute to the people who shielded the body of the soldier.
He said: “This is courage of the highest order, it sounds as if these members of the public are not soldiers, not policemen, not people whose duties demand this, they are extremely courageous people and that courage deserves to be recognised at the highest level.”
Robert Buckland, a Conservative member of the justice select committee, said: “It it is the case [that police took 20 minutes to arrive] it is very worrying. If there was any unwarranted delay then that that needs to be investigated.”

Not sure if the eyewitness mentioned above is the same one that video taped the statement from one of the savages involved and is on tape discussing his interaction with that savage here:

Man who filmed Woolwich video: I was not afraid

Witness: Man with knives made no attempt to flee

Note, the identity of the victim is yet to be revealed.
Posted by Pastorius at 12:41:00 am

Lord West interview (video) Lord West confirms this is the first successful killing of a British soldier on the mainland, by jihadists.

The victim was reportedly active duty and stationed at the Royal Artillery Barracks in London, near the location of the assault. It was not clear if either savage was still alive. Sky News noted that one savage was taken away from the scene by helicopter, while the other savage was transported to a nearby hospital in an ambulance. The active duty soldier/victim has not yet been named.

The victim is thought to be aged around 20 and reportedly on duty at an Army recruitment office in central London - was on his way back to the barracks when he was murdered by these savages at 2.20pm.

One of the savages is believed to be a British-born Muslim convert UK Telegraph link Did this reporter listen to what the savage stated in his video statement?
He quoted him, word for word. . .

" “We must fight them as they fight us. An eye for an eye and a tooth for a tooth. I apologise that women had to witness this today but in our lands our women have to see the same.

This savage doesn't appear to have any affinity - beyond taxpayer benefits - for his birth land, if this report is to be believed.


The perp**/ savage in the video is named Micheal Adeboloja known by Muslim name Mujahid, those who know him say he is revert(converted to Islam from Christianity) and a natural born British citizen.
Name sounds like his ancestry is from Nigeria.

All I can say is I hope he and every jihadist GET THEIR WAR.

More photos of EDL in Woolwich pulled from Nairaland chatboard:
one
two
threefour

Photo of victim in uniform?? but no name yet?

There are reports that one of the attackers was last year stopped or arrested on his way to join al-Shabaab in Somalia, according to Newsnight. 23:33 Telegraph link

I don't view this beheading as a terrorist attack.

I'm not sure what to call this. Perhaps "a Muslim-on-infidel attack"? Just a thought while I'm on my first cup of coffee for the day.

Always - glancing at the photo at the top of this thread, I think I see what you mean.

The savage faces the camera to present his case (this is shariah and it is here to stay) and then calmly returns to the scene of the crime.

This behavior mirrors the reaction of Cameron who states his case (twitter)
and essentially agrees with this savage . . .

David Cameron: 'One of the best ways of defeating terrorism is to go about our normal lives' - live video

I believe you are correct.

This guy is just a Muslim carrying out his religious duty. We can and should probably call this attack by its official name...jihad.

I believe that it is folly to refer to what this barbarian did as "terrorism" puts a spin on what happened and evades the primary issue. That is, what in the Quran commanded this jihadist to do the deed?

As for Cameron, he is, at the least, a dhimmi.

"TERRORISM" IS SIMPLY A EUPHEMISM FOR MULIM NOW.

I WOULD SIMPLY CALL IT JIHADISM IF I WERE IN CHARGE.