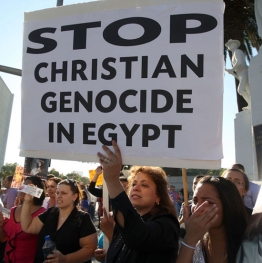 The Egyptian Coptic church has released a statement backing the country's military-backed government, and slamming the western media for its coverage of the violence in Egypt, which has killed more than 600 people. Referring to perceived sympathy for the Muslim Brotherhood by western media outlets, the statement, translated by Al Arabiya, called on the West to "read objectively the facts of events, and not give international and political cover to these terrorists and bloody groups."


The church reaffirmed its support for the Egyptian authorities, following the ouster of Muhammed Morsi.

“The Egyptian Coptic Church is following the unfortunate developments on the ground of our country Egypt and emphasizes its strong stance with the Egyptian police, armed forces and other organizations of the Egyptian people in the face of groups of armed violence and black terrorism.

“While we appreciate the sincere and friendly position that understands the nature of the developments, we strongly deplore the media fallacies that are prevalent in Western countries,” the statement read.

Egypt's Coptic Christian community makes up around 10% of the country's 90 million-strong population. Copts are indigenous to Egypt, their presence predating the Arab conquests of northern Africa. Egyptian Copts have long complained of widespread discrimination, persecution and violence by both the Egyptian state and Islamist non-state actors.

Anti-Christian violence has seriously escalated in the aftermath of the removal of Islamist Egyptian president Mohammed Morsi, whose supporters have been accused of scapegoating the Coptic community, after its leader, Pope Tawadros II, came out in support of the move by the army to oust Morsi.

A number of Christians have been murdered, and scores of churches and Christian-owned houses and businesses have been torched, ransacked and vandalized in the weeks since Morsi's removal.

At least two more Christians have been murdered since Wednesday, when Egyptian security forces forcibly broke-up protest camps in the capital Cairo. Two Christian schools were also attacked, in addition to churches and other Christian establishment.

The Muslim Brotherhood, whose members have been accused of playing a major part in anti-Christian attacks, has denied that it has anything to do with them, and has issued a condemnation of such violence on its official website.

The post was taken from the Facebook page of Dr. Murad Ali, who was identified as "Media Spokesman for the Muslim Brotherhood-affiliated Freedom and Justice Party" (FJP). The FJP is the party which successfully fielded Morsi as a presidential candidate.

The statement addressed "false Twitter and Facebook accounts in the name of the Freedom and Justice Party publishing justifications for the burning of churches," saying:

"These are attempts to ignite sectarian divisions to distract everyone from the real issue. Our stance is clear, we have announced it, and we reiterate:

“Based on the true nature of our religion, and pursuant to our party’s indivisible principles, we strongly condemn any attack, even verbal, against Copts, their churches or their property."

The statement went on to condemn "violence and vandalism" as harmful to the Brotherhood's reputation, insisting that the protest movement against Morsi's removal was "peaceful."Read the full story here.
Posted by Pastorius at 3:22:00 pm