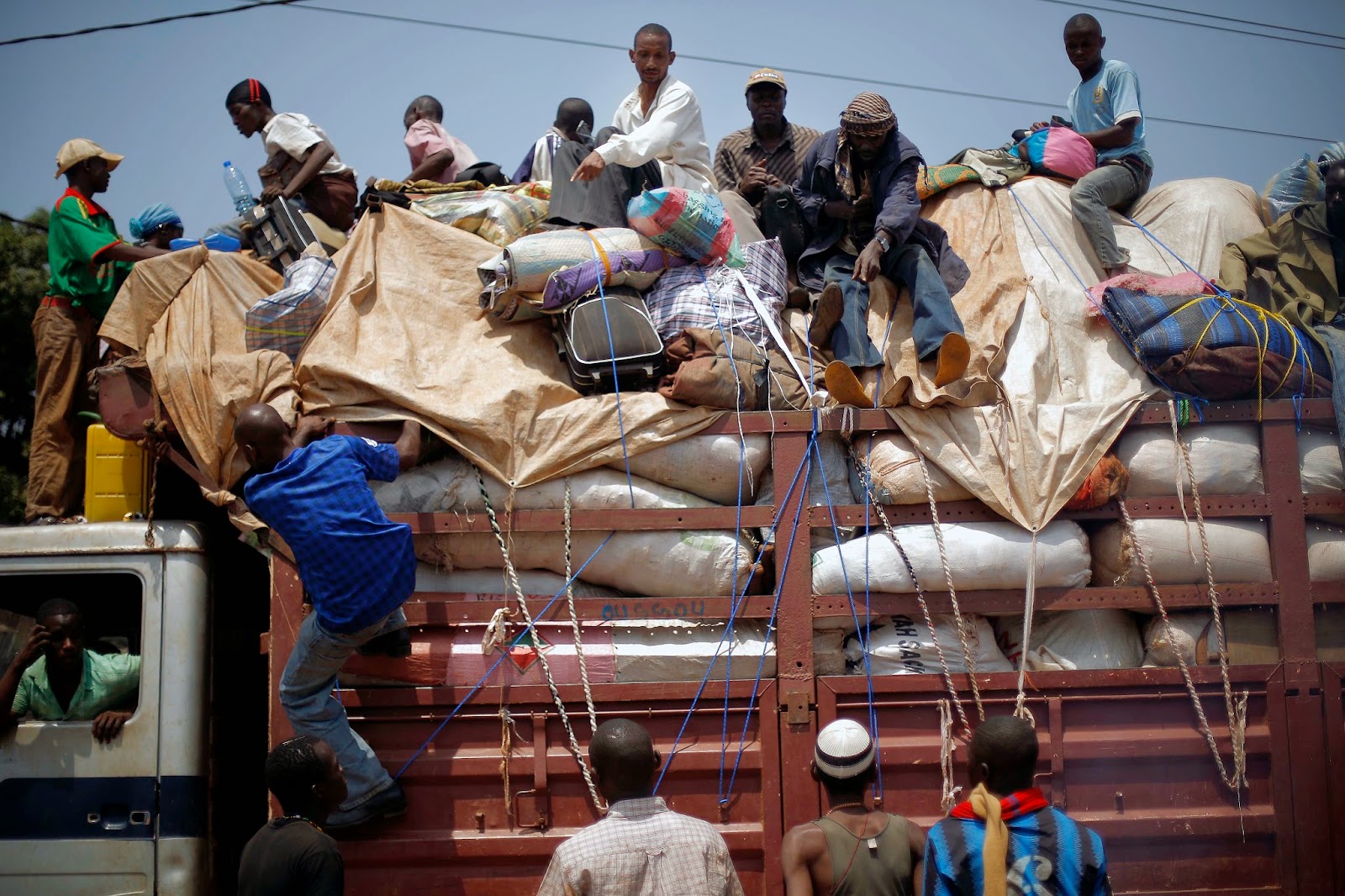 Oh Allah, We Gotta Get Out of Here

Muslims flee Northern Ireland to escape anti-Islam violence
(This is from June 3 2014. I would like to know if this trend has continued or was it an isolated thing which has been crushed. But it is instructive either way. A minimal amount of fighting back appears to have a large impact.)

WASHINGTON, June 3, 2014 — Some Muslims in Northern Ireland have announced plans to leave the country to avoid anti-Islamic violence. The announcement comes after an attack on a Muslim family in the city of Belfast, when crazed rioters broke into their home and assaulted them.

IF PEOPLE ARE ATTACKING MUSLIMS, AND ARE DEMONSTRATING THEY DON'T WANT MUSLIMS TO LIVE IN THEIR COUNTRIES ANYMORE, IT IS A GOOD IDEA FOR THE MUSLIMS TO LEAVE.

AFTER ALL, THEY HAVE 57 NATIONS TO RETURN HOME TO.

AND MANY OF THOSE NATIONS ARE SHARIA NATIONS, RULED BY THE LAW OF ALLAH.

WHY MUSLIMS WOULD WANT TO LIVE WITH US SCUMMY INFIDELS, I'LL NEVER KNOW.

GOOD ON YOU, MUSLIMS.

AFTER ALL, THEY HAVE 57 NATIONS TO RETURN HOME TO...

They want to live in Sharia shitholes like where they came from.

If that were not true, they would appreciate this place, but they do not.

They make it clear they want to change America into another Sharia shithole.

So they should go back.

And we should encourage them to go back.

As explained by William Federer, most Muslims came to the West to escape Shariah (I´m talking apostates, really.) And they were happy under the protection of US laws and Constitution.

Later came the jihadists and Brotherhood under the disguise of CAIE, ISNA, etc., and the West began to bend and twist to accommodate their demands. Things started to change for the Muslim community. When Europe started to "respect" shariah, and courts heard cases under shariah, including in the US, Muslims started to feel threatened, and no longer protected by their host country. More recently, Obama bowing to the Saudi king (no big deal for the kuffar, but a clear writing in the wall for Muslims,) Hillary using hijabs when visiting the Middle East, seeing the Brotherhood sliding into the WH, State, FBI, CIA, etc. they were left with not many options. They may have been apostates, but they usually lived in cultural clusters, and could be easily identified if their women were not covered, etc.

A friend of mine is married to a "Muslim," who attends church with her, they were married in the Catholic faith, and their children Christened and also married in the Catholic faith. His parents came from Lebanon decades ago. And his mother says you can no longer go to the mosque. They are all radicalized. Mosques used to be sort of a social club, a place for social gatherings and fun, now they are places of hatred.

Personally I don´t think there is a way out until our government starts facing reality and speaking with the truth, and identifying the enemy: the ideology of Islam. As long as they keep looking at it as a "religion" we are doomed.

Unfortunately, conservatives are as guilty and stupid like the liberals in this respect. McCain is a shameful example. They must all be bought by the petro dollars, and until they do not stop sucking from that tit, they are frozen and unable to think!

I know a crazy amount of people from all over the middle east who have moved to the West as "refugees" but always wish for and dream to return "back home" to their shithole where they allegedly "had to escape for fear of losing their lives".

I also know plenty of people who stay in the West as refugees until they're granted permanent resident status and then buy a ticket straight back to the shithole they came from to "visit family and friends". These are the same people who told the judges/lawyers/immigration officers that if they "lived in [their] home country [they] would be killed".

These barbarians are just that: barbarians who don't give a shit about the West. They use the holes in the refugee granting laws and system and enjoy the benefits at the expense of Western tax payers.

The bigger question is, why is their refugee status, and permanent resident/citizen status not revoked when they're seen exiting the country for the very country they claimed they couldn't live in? Or when they consistently wire money back to their shithole? Or whatever other scenario?

An even bigger question is...why are they even allowed in as refugees? On what basis? What possible "human rights" issue says that you should grant refugee status to those who don't even wish to coexist with those that disagree with them? What kinda dumb idiot would even think of such a thing?

Unless the goal is to move enough vermin from the third world so as to change the demographic completely to soothe the "white guilt" that the liberal elites constantly feel?

But fuck the elites right? When will the common man wake the fuck up and put a stop to this?

Mosques used to be sort of a social club, a place for social gatherings and fun, now they are places of hatred.

Perhaps in Lebanon which, not too long ago, used to be a majority Christian country.

I've been to plenty of mosques in my life...never seen a single mosque that was a social club, a place for social gatherings...and never even saw anything close to "fun" in a mosque unless you call sticking your ass in the air, smell of feet everywhere and cursing the infidels and praying that they die so you can rape their women "Fun".

Its always easy to blame "the other". "They came in and radicalized everything." "We were getting along fine before, partying, drinking and having sex in the mosques". But at the end of the day they are all the same. When the "liberal" Muslims stood to gain property in Lebanon, they cheered the Jihadis on to go and murder all the Christians or at least make them second class citizens who would forever serve the Muslims "just like Allah has willed it". Then the real Muslims came for the so called lib Muslims and then those lib Muslims made a beeline for the West.

But their actual desires have never changed - that the Muslims rule the world and everyone serve them "like they once did" (they never did but that's what's taught in schools in the Middle East). That is why in any fight lib or no lib Muslims will stand with each other and defend each other.

The mother says everything was fine and dandy before the Jihadis came. I say, what the fuck ever. I wish I cared but I really don't. I am sick and tired of the same old lies every single day while innocent Christians and Jews are killed by so called "liberal Muslims", "freedom fighters", "rebel forces" who are always "fighting against evil". Its only when the world found out, "whoops, we are so surprised, they just decapitated that innocent man...but why, we can't comprehend" that it becomes "the other"'s fault. "We were all singing kumbaya until they came along".

Whatever they want to say about each other, my message to them all is one and the same. Fuck you. You freely kill our brothers and sisters and then expect mercy from us when you can't go to the fucking mosque? Fuck you and fuck off!

Just to add to what I said above. I have said this many times before, the only kind of Muslim I trust is an ex Muslim. Everyone else is the same to me. If anyone wants to call themselves a Muslim and try to appear all civilized and "Western", my message to them is: Fuck off. You're no different than any other asshole freely and barbarically decapitating innocent people. You are all one and the same.

Does it make me a bad person when I judge the all the same way? Maybe. Too bad I don't give a shit. Those on here who know my store also know that in my position I can't afford to give a shit either.

who know my store

And, I want to hear the conversion story too.

... just like I do with the racists who now claim they are not racist anymore.

On top of that...I want to see them eat bacon (I don't care if they're vegetarians!), drink alcohol, kiss the flag of Israel, rub lard on the Quran and draw a cartoon of Moham being fucked by a pig...

What am I forgetting?

They are doing a very smart thing. Packing up, drive 20 miles across to the republic of Ireland and claim refugee status there. Once that's all set up, go back to Northern Ireland and claim unemployment due to PTS.