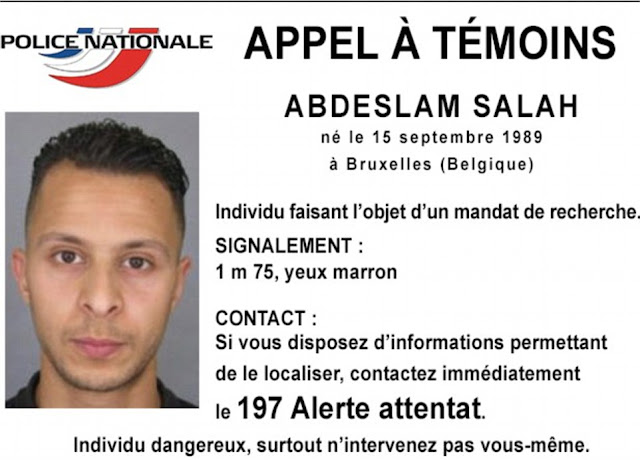 The three brothers behind Paris terror attacks: Police issue wanted poster for Belgian-born suspect as they reveal one of his siblings blew himself up in a suicide attack and another is in custody
Police have today issued an international arrest warrant for one of three French brothers believed to be at the heart of the eight-strong ISIS cell who murdered 129 people in Paris.

Police are hunting for Brussels-born Frenchman Salah Abdeslam, 26, who is accused of renting a Volkswagen Polo used by the suicide bombers who killed 89 people at the Bataclan music venue on Friday.
His brother Ibrahim, 31, blew himself up in a solo attack outside cafe Comptoir Voltaire after renting a black Seat found abandoned today filled with AK-47s and ammunition. A third brother, named Mohammad has been arrested in the Belgian capital.
It is believed the team of eight may all have gathered in a Belgian suburb called the ‘Jihad capital of Europe’ to collect their AK-47s and suicide vests. French and Belgian police are investigating links between the international cell and the Molenbeek area of Brussels known as a ‘den of terrorists’.
It came as Iraqi intelligence said they warned Western countries of an imminent assault the day before the Paris attacks and Turkish officials claim they foiled a plot to kill in Istanbul on the same day in revenge for Jihadi John’s assassination in a drone strike last week.

GO SEE THE OTHER TWO BROTHERS.
Posted by Pastorius at 1:37:00 pm

UKDailyMail: Mother of Paris suicide bomber says her son did not mean to kill anyone... and claims he may have blown himself up because of STRESS
Ibrahim Abdeslam blew himself up in attack outside cafe Comptoir Voltaire
He was one of three brothers said to be at the heart of the ISIS terror cell
Their family has since claimed that Ibrahim, 31, may have been 'stressed'

LOL - That's the best excuse I have EVER heard.