Mark Steyn: ‘"I’m Pretty Islamed Out, Because I Don’t Have A Lot to Say I Didn’t Say Ten Years Ago" 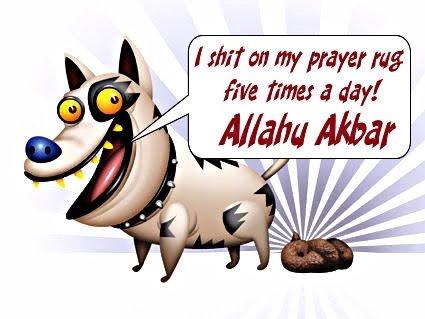 AOW, MR, and I talk about this all the time. I'm so bored with this subject, and yet it keeps boring into the civilization in which I live. I feel compelled to add something, anything.


Occam's Razor would suggest that Mohamed and Mohamed shot up that bar for the same reason as their fellow Mohameds turned a Paris rock concert into a bloodbath and the German New Year into an auld lang rapefest - because the infidels (rockers, boozers, women) have to be intimidated into accepting the supremacy of Islam. But the salient point is too salient to mention until somewhere between the 16th and 25th paragraphs. Mohamed and Mohamed - and Muhammad and Mohammed and Mahomet - must occasionally wonder what they have to do to get a bad press.
~Kathy Shaidle wrote over the weekend:

Between Charlie Hebdo and Cologne, I'm having trouble coping.
I guess I didn't think this was what my life was going to be like.

I'm feeling a bit the same way. I've spent the entirety of this no longer new century writing about this stuff. As I told Steve Paikin on a turbulent edition of his TV show all those years ago, the remorseless demographic transformation of the western world is the biggest story of our time, so why wouldn't a writer want to write about it? Apart from anything else, once you're aware of it, it haunts your dreams.
But most of us still aren't aware of it. I've been fortunate enough to get a couple of bestselling books out of the subject, but that's no comfort if, by the time they're my age, my children are living in a post-western world. And, of course, you can have a "bestseller" and 99.999999999 per cent of the population need never know of it. Every day I get letters from people who come here via a link from someone or other beginning in effect: "What do you mean, 'the Islamization of Europe'? It's the first I've heard of it."
Really? Why did the Charlie Hebdo guys get killed? Because they provoked Islam. Why is Europe's political class so willing to trade away free speech and women's rights? Because they're desperate to appease Islam. Why did the same young secular childless German women who supported Angela Merkel in her multiculti delusions spend the New Year getting groped and raped by the young men they so generously opened the doors of their country to? Because when you appease Islam you provoke Islam.
I'm pretty Islamed out, because I don't have a lot to say I didn't say ten years ago. Page 67 of America Alone:

You can pretty much carrying on doing all the things you like doing and the only difference is you'll be doing them for your new religion: you can lie, cheat, steal, rape, kill women and children, and as long as you're doing it for Allah and his victory over the infidels it's cool. So we have not just a global terrorist movement and a global political project but a global gang culture insulated within the west's fastest-growing demographic.

A soft culture will, by its very nature, be unlikely to find the strength to stand up to a sustained assault by blunter, cruder forces – like, say, those youths on the Antwerp bus, or the Muslim gang-rapists in France with their preferred rite of passage, the tournante or "take your turn".

The tournante has now advanced from the Muslim ghettoes to the central squares of major Continental cities on nights of public celebration. But what can be done? Page 120:

In 2001, Paris elected its first openly gay mayor, Bertrand Delanoë, and, as always, this was taken as evidence of how cool and relaxed everyone is about the whole gay thing nowadays. M le Maire certainly worked hard to put the gay in gay Paree... His big idea was the Nuit blanche – the "Sleepless Night" – of October 5th 2002, when the city's landmarks would be open for one big all-night party. Come to the Louvre, the Arc de Triomphe, the Eiffel Tower, and if you make it through till dawn there'll be free coffee and croissants...
And that's where M Delanoë was, in the thick of the festive throng, when he got stabbed. His assailant missed his aorta by less than an inch, but gamely the Mayor insisted that the party go on while he was taken to the Pitie Salpetriere hospital for a three-hour operation that saved his life.
His would-be killer was a Muslim immigrant, Azedine Berkane. But, as the establishment was at pains to emphasize, the good news is that he wasn't a terrorist. No, instead, he's just a Muslim who hates homosexuals.
And that's good news how exactly?
Le Monde reported from M Berkane's wretched riot-prone ghetto the views of his neighbors: "He was a bit like us," said one. "We're all homophobic here, because it's not natural."
"It's against Islam," said another. "Muslim fags don't exist."
A traditional terrorist has demands which are in most cases subject to circumstances: He doesn't want your troops on his soil? Okay, we don't really need them there anyway. Buta Muslim who hates you just cuz? That's all but impervious to external pressure.

Which is the real problem facing those women in Germany, and Austria, and Switzerland, Finland, Sweden...
Yet not enough of us are even aware of the problem.
Posted by Pastorius at 8:53:00 pm

Yes, we are Islamed out.

But now events are proving that we haven't been Islamophobes after all.

More such events to come before there's any effective infidel rage.

And now when someone wakes up, I want to slap their face.

What did it? The idea that some stranger thinks he has a right to handle your daughter's crotch at will because being in the west she's a prostitute?

People getting whacked at a christmas party because they are alive and had no idea what the shahada was?

The latest freakish statement from an Iran which has been making them since 1979?

A phila cop RESPONDING to a call for help on the receiving end of 13 bullets because the laws he upholds VIOLATE ISLAM?

Obama ONCE AGAIN mentioning how horrible it is when a mosque is defaced while the FBI ONCE AGAIN repeats there are five times as many antisemitic hate crimes?

What woke you up, you stupid stupid fucker?

Epa,
And now when someone wakes up, I want to slap their face.

What woke you up, you stupid stupid fucker?

My reaction is exactly the same.