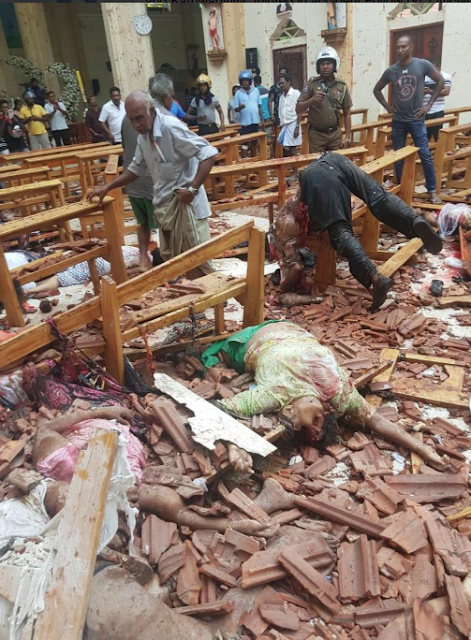 COLOMBO (Reuters) - Easter Day bomb blasts at three Sri Lankan churches and four hotels killed 138 people and wounded more than 400, hospital and police officials said, following a lull in major attacks since the end of the civil war 10 years ago.

The explosions, some of which officials said were suicide bomb attacks, led to an immediate clampdown, with the government declaring a curfew and blocking access to most major social media and messaging sites.

It was unclear when the curfew would be lifted.

More than 50 people were killed in St. Sebastian's gothic-style Catholic church in Katuwapitiya, north of Colombo, a police official told Reuters, with pictures showing bodies on the ground, blood on the pews and a destroyed roof.

Media reported 25 people were also killed in an attack on an evangelical church in Batticaloa in Eastern Province.

The three hotels hit were the Shangri-La Colombo, Kingsbury Hotel in Colombo and the Cinnamon Grand Colombo. It was unclear whether there were any casualties in the hotels.

The first six explosions were all reported within a short period in the morning just as church services were starting.

Nine foreigners were among the dead, the officials said.

Video posted by someone on the ground at the site of one of the explosions says Sri Lanka is under attack. pic.twitter.com/iu8zqTPvRm
— F. Jeffery (@Natsecjeff) April 21, 2019

Know the peace of Islam...

Every Westerner -- every single one -- should be forced to look at these gory photos. Maybe then...

But instead, the Government-Media/Academia Complex hides them from us.