The Bosnian War. A Jihad In Europe? - Part 2

The following list of articles, videos and pictures shows Mujahideen (Mudzahedin) and Al-Qaeda presence in Bosnia during the early 90's, in the run up to, during and after the Bosnian Jihad against the Serbs. The documents, videos and pictures also show the connection and detail the control of command that the Bosnian President Alija Izetbegovic had over the Mujahideen and Al-Qaeda fighters. Also documented is the Jihadist nature of the Bosnian armies and the fact that not only did the Bosnian president approve of this, but was the one who helped establish this supremacist Islamic ideology in the Bosnian Muslim people. (I have noted in brackets in cases where the pictures are linked to videos. I have tried to keep some order to the information below, but with so much information to post, this became difficult, so apologies for some of the random order) 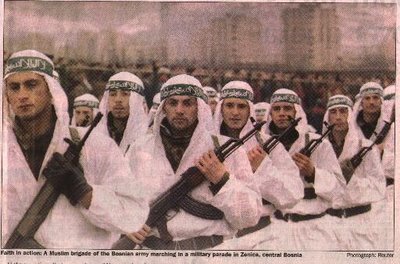 A photo of the mujahedeen unit in the Bosnian Muslim Army on parade in downtown Zenica in 1995. They are wearing green head bands that read in Arabic: "Our way is the Jihad." 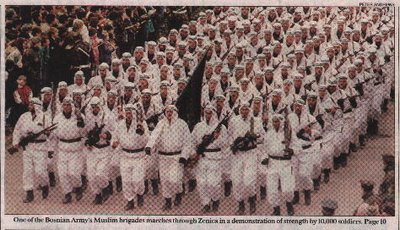 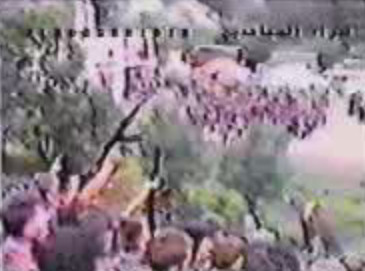 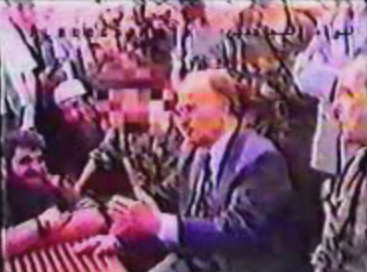 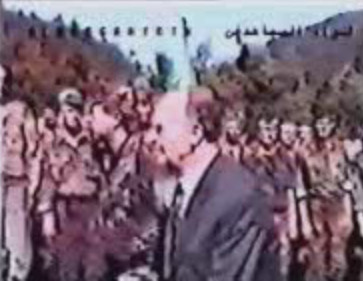 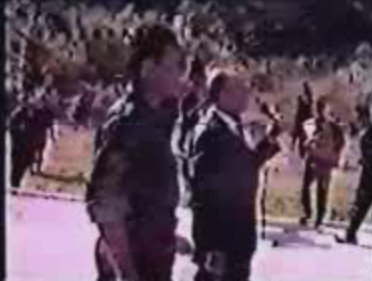 [this is a video although it will not open in media player. Right click and save the file (target), then open in a player such as VLC] Bosnian President Alija Izetbegović Makes A Speech To The Mujahideen. The huge army responds with "Allahu Akbar" 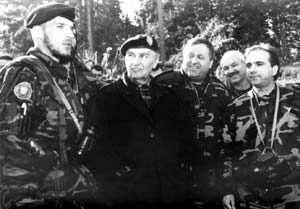 (Bosnian President) Alija Izetbegovic with memebrs of 7th Brigade [Odred Mudzahedin]
"... The first and foremost of such conclusions is surely the one on the incompatibility of Islam and non-Islamic systems. There can be no peace or coexistence between the "Islamic faith" and non- Islamic societies and political institutions. ... Islam clearly excludes the right and possibility of activity of any strange ideology on its own turf. Therefore, there is no question of any laicistic principles, and the state should be an expression and should support the moral concepts of the religion. ..." page 22 "The Islamic Declaration" book ("Islamska deklaracija"), written by Mr. Alija Izetbegovic, Bosnian Muslim leader. (edit-Bosnian Muslim "President")
[..]
In preparing the ground for the conflicts between Bosnian Cristians (Croats and Serbs) and Bosnian Muslims, residents of different Arab countries who in the B&H had recognized the elements and challenge of “a holy war” - jihad. Coming from different Arab countries, most of them were from Yemen, Algeria, Egypt, Tunisia and Afghanistan, and bringing with them experience from a war from some of the Islamic trouble spots...It was reported that the Mujahedin began arriving in BiH as early as June 1992. (Tom Post & Joel Brand, «Help from the Holy Warriors», Newsweek, 5 October 1992, at 52).[Link]

Picture of an ID Bosnian Muslims issued to an Al-Qaeda terrorist Ahmed Zumair. Thousands of al-Qaeda got these IDs as well as passports.

Ossama bin Laden’s right hand man and top lieutenant, Saudi Abu Sulaiman al-Makki, was part of the first mujahedeen force to arrive in Bosnia. These were mujahedeen recruited, financed, and organized by Ossama bin Laden. Al-Makki joined Barbaros in the first attack by about 43 Saudi Arabian mujahedeen in central Bosnia against Bosnian Serb forces. This is the engagement where the Saudi Arabian mujahedeen decapitated three Bosnian Serb troops near Teslic and held their heads as war trophies. A prominent member of this mujahedeen contingent that attacked Bosnian Serb forces, Abu Asim al-Makki, later was the major planner of the October, 2000 attack on the USS Cole that killed 17 US sailors.[Link]

Abu Abdel Aziz Barbaros, the "senior Al-Qaeda" who commanded the Bosnian Muslim mujahedeen unit of the Bosnian Muslim Army.
The commander of the El Mujahed Battalion was Abu Abdel Aziz “Barbaros,” described as a “senior Al-Qaeda recruiter” in a report presented before the National Commission of Terrorist Attacks Upon the United States (popularly known as the 9/11 Commission)...He was an early member of the Al-Qaeda movement established by Osama bin Laden and Abdullah Azzam.
After war broke out in Yugoslavia, Aziz was made the amir, or military commander of the Saudi Arabian and Afghani mujahedin in Bosnia. Aziz established his headquarters at the Mehurici camp outside of Travnik in central Bosnia.
[..]
German reporter Renate Flottau of Der Spiegel reported that she personally saw and spoke to Osama bin Laden in 1994, when he allegedly visited Alija Izetbegovic in Sarajevo. Bin Laden had been issued a Bosnian passport by the Bosnian Embassy in Vienna in 1993. One of the suicide hijackers in the 9/11 attacks also had a Bosnian passport. Moreover, four to six Bosnian citizens, Algerian Muslim mujahedin who were granted Bosnian citizenship by the Bosnian Muslim government were later arrested by US forces and sent to the Guantanamo Bay prison where they were questioned on their connections to Al-Qaeda.[Link]

...far more interesting news item concerning bin Laden, the one that has been either overlooked or else deliberately ignored by the mainstream media. It concerns the testimony of my old acquaintance, British journalist Eve-Ann Prentice, who appeared as a defense witness at Slobodan Milosevic’s trial at The Hague on February 3. Presiding judge Patrick Robinson abruptly stopped her testimony the moment she disclosed having seen Osama bin Laden walk into the office of late Bosnian President Alija Izetbegovic in November 1994. Before she could continue Prosecutor Geoffrey Nice objected and judge Robinson cut off the testimony, declaring it “irrelevant.”
[..]
...Sorces close to the Milosevic defense team have posted an unofficial summary of her testimony, which says she was cut off after testifying that, “[w]hile she was waiting in Izetbegovic’s foyer both she, and a journalist from Der Speigel, saw Osama bin Laden being escorted into Izetbegovic’s office.” This account has not been contradicted by the ICTY or by Ms. Prentice herself.[Link]

The United States has long been alarmed by the presence in Bosnia of hundreds of Arab-born Muslim fundamentalists who first traveled there in the 1990s to fight for the nation’s substantial Muslim population during the civil war. Many went there at the direction of Osama bin Laden, who apparently saw the opportunity for a Jihad defending Muslims against Serb and Croat Christians.
Osama Bin Laden directly aided the Bosnian Muslims, both financially (weapons procurement) and with training. In addition, that same “aid” was extended to the separatist Albanians of Kosovo and Macedonia. Ironically, the US found Bin Laden and his supporters “convenient” allies when dealing with Bosnian Muslims and Kosovo Albanians, again in another so-called struggle for “freedom ”.
[..]
Abu el Ma’ali (Abdelkader Mokhtari), a senior representative of Al-Qaida, was based in Bosnia until recently. Just a few years ago, a US official called him a junior Osama Bin Laden. He had to leave Sarajevo after several embassies complained to the Bosnian authorities. Incidentally, he was issued an apartment by none other than Bakir Izetbegovic, son of Alija, who ran the Sarajevo Canton Construction Bureau [government agency supervising all construction and development – tr.][Link] (note:there is a lot more relevant information this link, too much for a short post)

Therefore, it is safe to say that the birth of al-Qaeda as a force on the world stage can be traced directly back to 1992, when the Bosnian Muslim government of Alija Izetbegovic issued a passport in the Vienna embassy to Osama bin Laden. The Wall Street Journal reported in 2001 that "for the past 10 years, the most senior leaders of al Qaeda have visited the Balkans, including bin Laden himself on three occasions between 1994 and 1996...Many recruits to the Balkan wars came originally from Chechnya, a jihad in which Al Qaeda has also played a part."[Link]

The Bosnian government received money, arms and a number of volunteers from a number of Muslim countries, including Iran, Saudi Arabia, Kuwait and Libya. The latter caused particular controversy: foreign fighters, styling themselves "mujahiddin," turned up in Bosnia...The German magazine Der Spiegel claimed that Osama bin Laden and other al-Qaeda guerrillas visited Bosnia in 1993 and met Izetbegović when he inspected a unit of Islamic volunteer fighters. [Link]

About 80 people in central Bosnia are manning road blocks around a village where evictions from illegally occupied properties were reported to be imminent.
The villages are largely occupied by Mujahideen, ex-soldiers from Islamic countries, who came over to fight for the Muslim dominated Bosnian army during the war.
Many of them have settled in villages around the municipality of Maglai, and are now living illegally in Serb-owned houses.
Most live illegally in houses vacated by local Serbs fleeing fighting which swept through the area during the war from 1992 to 1995.[Link]

Brzezinski's interview has tremendous importance today. According to a Dutch intelligence report on Bosnia, in the early 1990s Pentagon intelligence worked with the Saudis and Iranians to bring weapons and mujahideen terrorists - the 'Afghan Arabs' - into Bosnia to indoctrinate and lead Alija Izetbegovic's Muslim extremists in fighting the Bosnian Serbs.[Link]

a highly classified State Department report, prepared last year, warned that the Muslim-controlled portions of Bosnia have become a safe haven for Islamic terrorism. The report pointed out that hundreds of foreign mujahideen, who became Bosnian citizens and received passports after battling their Christian foes, present a major terrorist threat to Europe and the United States. They include hard-core terrorists, some with ties to Osama bin Laden, who were protected by the Muslim government in Sarajevo.[Link]