Biotech CEO, Ugur Sahin Says "I Am Not Legally Allowed To Get The Vaccine"

Look who else has NOT taken the V ... 👀 The Biotech CEO!!! pic.twitter.com/WchIqIZSIn

Uğur Şahin is a German oncologist and immunologist. He is the CEO of BioNTech, which developed one of the major vaccines against COVID-19. BioNTech partnered with Pfizer in creating the most well-known COVID vaccine on the market.
Posted by Pastorius at 2:07:00 pm No comments:

FBI, Is That You?

A beautiful night at the Lincoln Memorial interrupted by demonstrators chanting “reclaim America.“ The crowd gave them the finger and exchanged profanities. pic.twitter.com/Z2voculi9Z

FBI masquerades as “white supremacists” likely to gin up some justification to arrest, torture or gulag Trump supporters and opponents of the new Communist US order. I say this because that is how it looks to me. And because so many have spent a year in jail, even in Solitary with no trial just for being near the Capitol buildings on January 6 2020. Watch Tucker Carlson’s documentary for proof of this.

Everything about this scene is weird: the identical clothes, the masks, the plastic shields, the greaves. I don’t know; maybe white supremacists actually dress and act like this. I can’t say, as I’ve never met one.

Twitter conservatives promptly questioned whether the whole thing was staged by the FBI. For example:

How Many Airline Airline Pilots Have Died In 2021? 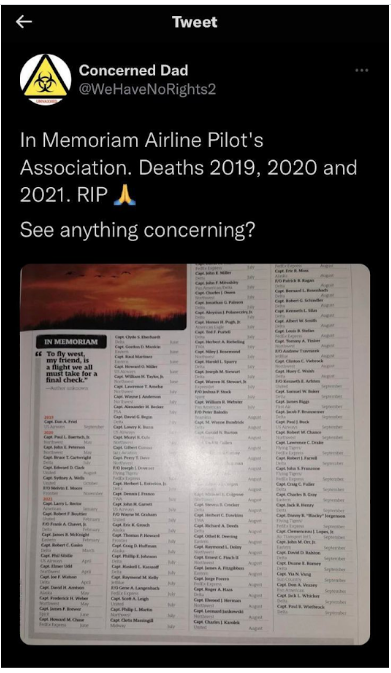 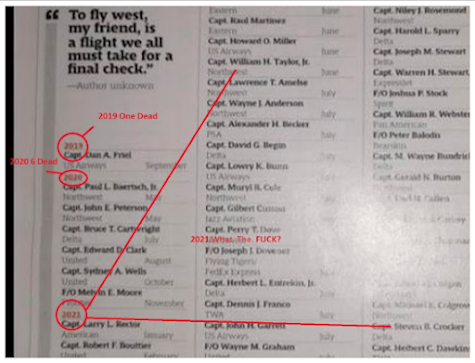 WestJet flight diverted back to Calgary after pilot medical emergency

“Then they made the call for if there is a doctor, nurse or EMT on the plane and as luck would have it, one doctor came forward and two nurses,” White said. He said a pilot on board in the passenger area also made his way to the cockpit.

White said the pilot was brought out of the cockpit and set down as medical volunteers treated him. The pilot appeared to collapse shortly afterwards.

“They were able to get him talking again after they got him on the floor, but they were working on him pretty feverishly,” White said.

Why I Am Not Complying

I am 5 hours into my 12 hour shift and have already treated 3 vax injuries. Heart attack, 36y/o, Stroke, 44y/o and a lower leg blood clot, 29y/o. All recently vaccinated. Heart attack and stroke patients are critical. I don’t know which vax they had.

GIANT TURDS: In This Exhibition, You Walk Through Excrement 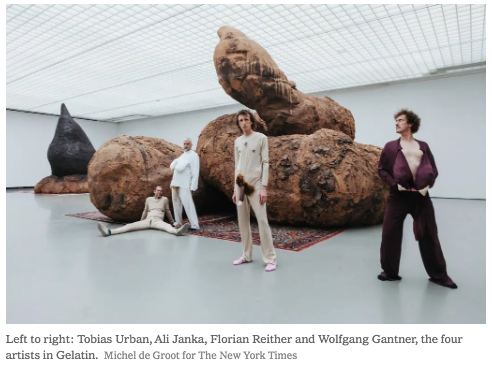 I'm absolutely sure this is not near the beginning of the end of the battle.
But ...
Posted by Pastorius at 5:26:00 am No comments:

Words That Go From The Heart, Enter The Heart

Service With A Smile 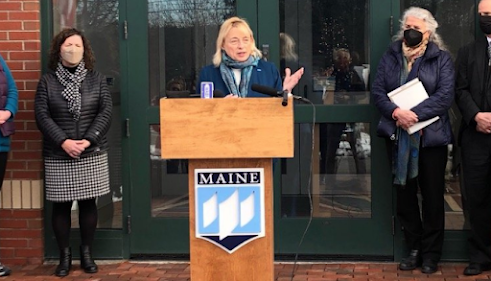 Recall, Governor Janet Mills in August announced that healthcare workers in Maine must be fully vaccinated by October 29.

The Liberty Counsel filed a lawsuit on behalf of approximately 2,000 healthcare workers in August. On October 29 the US Supreme Court in a 6-3 vote rejected the health care workers’ request.

Three conservative justices, Neil Gorsuch, Clarence Thomas and Samuel Alito said they would have ruled in favor of the Christian group seeking relief from the Covid vaccine mandate.

Hospitals in Maine are now understaffed due to Mills’s Covid vaccine mandate.

Fauci and Moderna and the U.S. government and Gain of Function

Moderna was in on the gain of function research and vaccine research very early on, BEFORE THERE WAS A PROBLEM.

Long ago I decided Glen Beck was a bit kooky but here he seems to have the goods and has passed them on to Rand Paul.

Fauci, The Most UnAmerican American In History

Fauci: "I would prefer, and we all would prefer that people would be voluntarily getting vaccinated, but if they're not gonna do that, sometimes you've got to do things that are unpopular, but that clearly supersede individual choices..." pic.twitter.com/yxbOw9cwKw

A top player with the Adelaide Crows was sent to hospital and diagnosed with pericarditis after receiving Pfizer COVID-19 vaccine. FIVEaa’s Stephen Rowe reported this on his show Friday.

The player spent a day in the hospital and was diagnosed with pericarditis. His cardiologist told him that he is not allowed to exercise for three months and he should take medications. The identity of the player was not published for privacy reasons. Rowey said during his Rowey’s Sports Show: A Crows top-up player two weeks ago got his first COVID jab. He needed to do that to train, obviously, because the top-ups trained with the senior boys at times.

So in short, he presented symptoms to the club doctor who acted immediately and sent him to the RAH. I think that was maybe on Wednesday. And the doctors are just brilliant, absolutely superb to be able to pick up symptoms like that. Anyway, off goes the young kid, after testing was diagnosed with pericarditis.

And if you don’t know what pericarditis is, it’s the swelling of the outer tissue of the heart. It’s scary. He spent a day in the hospital. The young lad, his cardiologist has said for three months, no exercise and he’s on medication. Our understanding after a number of phone calls today, his prognosis is very good.

He’ll make a full recovery and I say, thank God. And the reason I say that my niece, my brother’s middle daughter, had exactly the same thing, probably around the same age. It is mandatory for players and officials to be fully vaccinated.

Following the ordeal of one of the players, Adelaide Crows’ director Nick Takos has resigned from his position, criticizing the Australian Football League’s “forceful” mandatory COVID-19 vaccination policy. Takos says he sought and was denied a medical exemption from having a COVID-19 vaccine.

“The AFL’s COVID mandate, and the club’s deeply concerning response to it, has left me with no choice but to step down,” Takos said in a statement on Wednesday, 7News reported. More report from 7News: “While I am not anti-vaccination generally, corporations should not tell their staff and footy fans what medical treatment is good for them through a mandatory vaccination policy. Advertisement - story continues below “I cannot support a coercive and forceful policy that does not consider the proportionate risk to players and staff.

“I cannot support a policy that unfairly discriminates against our highly diverse 60,000 members and over 650,000 fans who have a wide range of personal and medical considerations when it comes to vaccination.” The Crows have ruled that all players and officials must be fully vaccinated, after the AFL previously mandated the jab for all players and football staff.

The cut-off date for a first vaccination dose under AFL rules was November 19.

Takos said he became “increasingly concerned” after one of Adelaide’s SANFL players was diagnosed with pericarditis, a serious heart condition. He said the state league player was diagnosed “as a result of taking the COVID vaccination at the direction of the AFL and club”. “Based on this, I called a special board meeting to urgently discuss the player’s condition, the health and safety of all of our players and other associated risks,” he said.