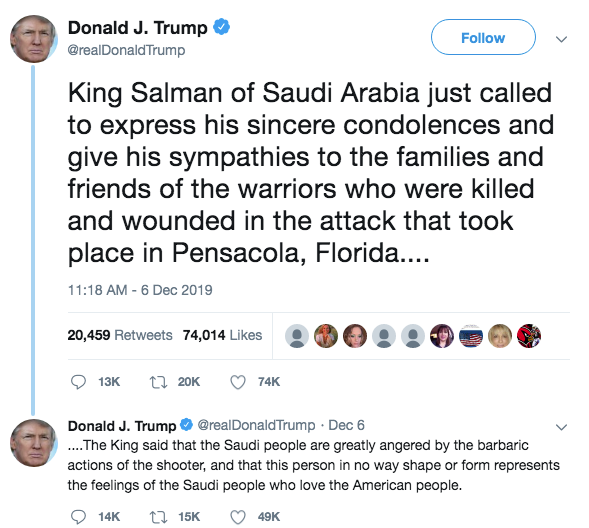 This is not Trump speak.

I can't think of a time where Trump talked about what another person "says", unless he thought the person was lying.

When Trump is praising someone, he says, "They agree with me."

When he is working out a deal with someone, or coming to a meeting of the minds, he will say, "We agreed," or, "We are working together."

And that does not bode well for the Saudis.
Posted by Pastorius at 1:14:00 am

Disagree with you, Pasto.

And you will probably delete this comment, but I am furious.

I am not strongly enough committed to my take to argue with you.

Trump's wording struck me as odd for Trump. So I tried to figure out why.

I could be wrong.

Maybe the reason his wording is odd is BECAUSE HE IS LYING.

Maybe he knows Saudi is at fault but feels his hands are tied.

That could very well be the case.

“Our diversity, not only in our Army, but in our country, is a strength. And as horrific as this tragedy was, if our diversity becomes a casualty, I think that’s worse.”

Those were the words of General George Casey, the Army's top officer, in the aftermath of the Fort Hood massacre.

And that attitude among the US military leadership is what I find most troubling.

Maybe the reason his wording is odd is BECAUSE HE IS LYING.

Maybe he knows Saudi is at fault but feels his hands are tied.

I'm leaning toward that interpretation.

He is the Commander in Chief of the most powerful nation on the planet.

I always place myself in the shoes of the observer after a shooting. In this case, the dying and injured were taken to the same hospital after the attack. How do the nurses and doctors feel about seeing military personnel brought in their khaki uniforms, ribbons on chest, with blood seeping onto what represents not only the cloth of our nation, but each one of us?

This is not the time to pat the hand of the other. The Kingdom of Saudi Arabia remains a top exporter and financier of terror. This attack, nurtured from mother's milk (native tongue and culture) and the womb of Islam.

Let the POTUS dip his finger in the blood of patriots. And then, let him speak.

Perhaps I am incensed because not only was this my initial introduction to the Navy but I was also present for the Garland attack. I await.... one more interface.

We will agree on freedom of expression, which we are exercising. For that I remain grateful.

Unless, and until the POTUS re-addresses and reverses "The Great Purge", we can expect more of the same. 45 should have begun full reversal of The Great Purge the day of his inauguration. His policies will remain hogtied unless this is fully addressed.

For some reason, Donald Trump doesn't seem to listen to the Center for Security Poliicy, the Gaffney's, Claire Lopez, and Christine Brim.

I wonder why that is.

By the way, in this case, Claire Lopez is right.

But as I warned, policy such as that advocated by the Center for Security Policy will have the long-term effect of relegating the anti-Jihad movement to the margins.

In short, the CSP and their followers (who I will not name) fucked up beyond belief.

In retrospect, I think our anti-Jihad movement was infiltrated by a pro-Jihad Psy-ops movement within the Intelligence agencies. Bad ideas were planted and people bought them hook, line, and sinker, and ended up advocating for policies that splintered and marginalized our movement..

Everyone should be following my NYPD brother @odonnell_r for the truth on #PensacolaNAS.

His son was on scene as a pilot trainee, and Rob is one pissed off dad, and one of the best investigators the NYPD has ever seen, as to how the FBI is dragging their feet on this.

Well, I don't like Adam Schiff. Wasn't aware he called Trump a Saudi asset. But I wrote a blog several hours ago along the same lines because I am still bloody pissed off.

We wouldn't put up with the utter nonsense if Trump visited a pedophile penal colony and then tweeted out that the people just love children.

At the moment, I kinda just can't stand the whole human race.