Cartoon rage starting to build up. 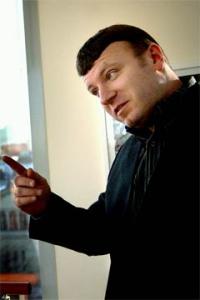 The rage over the Mohammad cartoons have started to build up again after several Arabic media channels have discovered that Norwegian TV station, TV2, showed the offending cartoons.

Some Muslims in the middle east reacted with disgust when they learned that TV2 showed the cartoons in TV documentary, "Document 2". Al-Jazeera and Al-Arabiya have several articles on Doc 2 and Magazinet editor Vebjørn K. Selbekk’s new book on their homepages, writes Nettavisen.

And it didn’t take long before people started reacting. Readers from around the globe were outraged when they learned that the TV station showed the cartoons of the prophet Mohammad.

According to Nettavisen, several Arabic media channels have a detailed description of the TV program and the response from Norwegian politicians. They also report that Selbekk didn’t apologize because he was wrong in printing the cartoons, but because of death threats and strong pressure from the Norwegian government to do so.

Ooooops, looks like I'll have to wear my Bomb Hat Big Mo T-shirt again on the off chance that someone on the outer ring planet known as the North Shore of Massachusetts might actually recognize what it is.

When I say they are clueless up here, gang, I don't even begin to tell the story...

Reported in my Infidel Blog, "The Freedom Fighter's Journal" -- three cheers for Norway!!!

Sincerely, Sergeant Ronbo, a Zionist Christian Crusader and proud of it.

I should buy bobblehead mohammed and display it when I go up to DC on I-66. I spotted several child-bearing vermin wearing Hijab on my way up there yesterday.