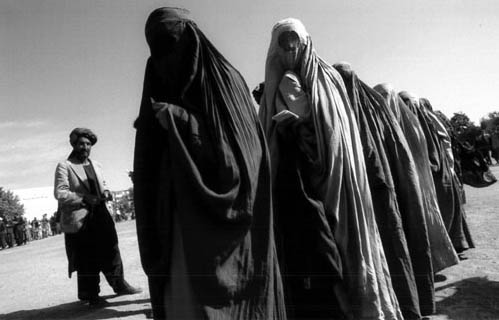 
. . . Wives have the same rights as the husbands have on them in accordance with the generally known principles. Of course, men are a degree above them in status . . . (Sayyid Abul A’La Maududi, The Meaning of the Qur’an, vol. 1, p. 165)

8. A male gets a double share of the inheritance over that of a female.
The Quran in Sura 4:11 says:


And let two men from among you bear witness to all such documents [contracts of loans without interest]. But if two men be not available, there should be one man and two women to bear witness so that if one of the women forgets (anything), the other may remind her. (Maududi, vol. 1, p. 205).

6. A wife may remarry her ex—husband if and only if she marries another man and then this second man divorces her.
The Quran in Sura 2:230 says:


And if the husband divorces his wife (for the third time), she shall not remain his lawful wife after this (absolute) divorce, unless she marries another husband and the second husband divorces her. [In that case] there is no harm if they [the first couple] remarry . . . . (Maududi, vol. 1, p. 165)

5. Slave—girls are sexual property for their male owners.
The Quran in Sura 4:24 says:

4. A man may be polygamous with up to four wives.
The Quran in Sura 4:3 says:

3. A husband may simply get rid of one of his undesirable wives.
The Quran in Sura 4:129 says:


It is not within your power to be perfectly equitable in your treatment with all your wives, even if you wish to be so; therefore, [in order to satisfy the dictates of Divine Law] do not lean towards one wife so as to leave the other in a state of suspense. (Maududi, vol. 1, p. 381)

2. Husbands may hit their wives even if the husbands merely fear highhandedness in their wives (quite apart from whether they actually are highhanded).
The Quran in Sura 4:34 says:

4:34 . . . If you fear highhandedness from your wives, remind them [of the teaching of God], then ignore them when you go to bed, then hit them. If they obey you, you have no right to act against them. God is most high and great. (Haleem, emphasis added)

1. Mature men are allowed to marry prepubescent girls.
The Quran in Sura 65:1, 4 says:


65:1 O Prophet, when you [and the believers] divorce women, divorce them for their prescribed waiting—period and count the waiting—period accurately . . . 4 And if you are in doubt about those of your women who have despaired of menstruation, (you should know that) their waiting period is three months, and the same applies to those who have not menstruated as yet. As for pregnant women, their period ends when they have delivered their burden. (Maududi, vol. 5, pp. 599 and 617, emphasis added)


Anti-racism activists on Monday condemned plans to hold a "pork sausage and wine" party in a multi-ethnic Paris district to protest against what the organisers call the area's "Islamisation."

SOS Racisme called for the event scheduled for Friday in the Goutte d'Or area of north Paris to be banned because it sent out a "message of hate and of violence towards groups of people because of their real or supposed origins."

The opposition Communist Party said in a statement that "this disgusting joke seeks to exacerbate the differences that make for the richness of the 18th arrondissement (district)."

The idea came from Sylvie Francois, a local resident who told French radio that she set up a Facebook page for the event to fight against what she saw as the increasing "Islamisation" of her area.

The project has been publicised on internet social networking sites by a small far-right group that calls itself the Bloc Identitaire.

Paris police said they will meet with the event's organisers on Tuesday to consider their official request for permission to hold the event.

I hope that there aren't a lot of innocent people, especially women who fall for this campaign. Did you let Revere Rides Again know about this? I bet she'd have a few choice words about it as well.

By the way, I forgot to say you're welcome. However, one minor thing, maybe you should put the link to the telegraph story somewhere other than the title of your post. Many people might not think to click on it.

Then again, most of the titles on this blog are not click-able.

Good thing to not only memorize the salient verses, but it is imperative to be in their faces and force them to back down. They must be condemned both for the words and deeds, and we must not flinch in standing up. Now more than ever we must stand up with organizations like RAWA (revolutionary afghan womens association) and Ni Putes ni soumises. (neither whores nor doormats - a french organization of muslim women who speak out against the veil, against forced marriage, and shariah within the confines of the banlieus of France's major cities. We must call bullshit on these propagandists and mock them, ridicule them and be unafraid about standing in their faces....one useful tactic, à la Wilders would be to pare the actual verses with posters of the hideous realities. We need to show how ugly Islam is and the best way to do it is using their scriptures with photos. Shame them. Shame them all.

It's the religion of barack hussein obama's heritage - the faith of peace. They know that a man sometimes feels compelled by God to slap his wife around a little...and what man doesn't want to get rid of unruly wives?

Waiting for the Bible quotes to provide a false comparison. Of course, neither Jews nor Christians practice such discriminatory things anymore from our Scriptures. It is purely historical, not a code for current conduct.

Ephesian 5: 25Husbands, love your wives, just as Christ loved the church and gave himself up for her 26to make her holy, cleansing her by the washing with water through the word, 27and to present her to himself as a radiant church, without stain or wrinkle or any other blemish, but holy and blameless. 28In this same way, husbands ought to love their wives as their own bodies. He who loves his wife loves himself. 29After all, no one ever hated his own body, but he feeds and cares for it, just as Christ does the church— 30for we are members of his body. 31"For this reason a man will leave his father and mother and be united to his wife, and the two will become one flesh."[c] 32This is a profound mystery—but I am talking about Christ and the church. 33However, each one of you also must love his wife as he loves himself, and the wife must respect her husband.