THREAT OF WAR - Fears of all-out conflict in Ukraine as sabre-rattling Vladimir Putin places 40,000 troops and armoured vehicles along the border 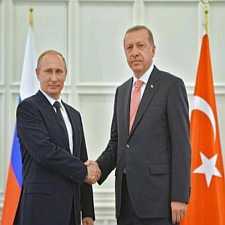 
AS many as 40,000 Russian troops are massing on the country’s border with Ukraine – prompting fears of a new military invasion. The Pentagon has identified eight staging areas dotted along the border, suggesting Russian strongman Vladimir Putin is preparing for new incursions. Officials told the publication similar movements were seen before Vladimir Putin carried out his deceptive annexation of the Crimea. Such manoeuvres have reduced the “warning time” available to the US if he decides to launch another attack. In June it was reported Russia was constructing an army base near the border which it considers to be a new front line with NATO.


On August 23, 1939, the Foreign Ministers of Germany and Russia, Ribbentrop and Molotov, signed an extensive non-aggression pact which resulted in the future de facto division of Poland and surrender of all German claims to the Baltic states and some Romanian border territories in exchange for Germany having a free hand to deal with what they called the “Polish Problem” of that moment in history.

Nine days later the world was introduced to Blitzkrieg, total war, and an overwhelming modern invasion of a nation which was promised help from the West of that moment in history, France and the United Kingdom, but never had a prayer in the face of the speed of the war and ineffectiveness of the Western nations at that time.

Fast forward to 2016, and a meeting a few weeks ago which is still shaking the entire European and Middle Eastern political sphere of influence:

Was this meeting between Erdogan and Putin the modern day equivalent of the Molotov-Ribbentrop meeting in 1939? If so, it pays to analyze the consequences of what Turkey and Russia may gain beyond the obvious economic benefits and which nations might soon fall under the sword of a world weakened by appeasement, apathy, and incompetence.

It is only an educated guess at this point, but based on Putin’s history, he will wait until the last Russian athlete boards a flight out of Rio before anything begins. If Vlad were to restart the Ukraine war, my guess is during market hours (they are UTC+2 in Kiev) so mischief beginning between noon and 4 p.m ET on August 22nd would not surprise me.

With Turkey apparently resuming a desire to have a joint defense plan with Russia, it means that their nation is willing to turn a blind eye to events in the Ukraine as the destruction of that government strengthens their ally plus improves the odds of a larger share of natural gas shipments into Europe via the Turkish Stream pipeline.

In Turkey, people seem to believe Erdogan is some sort of Messiah sent by Allah to re-establish the Caliphate: