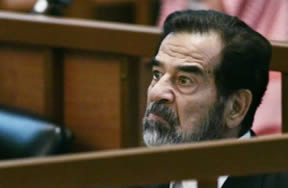 Hussein was convicted of ordering the killings of 148 men and boys from the town of Dujail, about 35 miles north of Baghdad, following a failed assassination attempt against him there in 1982. Hussein's presidential convoy was passing through the town when it was shot at. In response, he and other top Iraqi officials at the time order the round-up of hundreds of people, and the town's buildings were razed and it's orchards destroyed.

Ten of the people executed were boys ranging in ages from 11 to 17 at the time of the incident. The government held them in jail until they were 18, then hanged them.

The verdict climaxed a 12-month trial, conducted by the Iraqi High Tribunal and backed by the U.S. government, that arose from one of many atrocities Hussein is accused of committing during 24 years of brutal, one-man rule.

[...]Sajjad Abdul Hussein Ali, a Shiite Turcoman in the northern city of Kirkuk who had three brothers executed by Hussein in the early 1980s, called the verdict "the final show, and a triumph for all the families that were victimized by the Saddam regime."

"Reconciliation will not succeed without executing him and putting an end to a dark, dirty period of our modern history, so that this will be a lesson to all dictators and tyrants," he said. "Let them know that killers shall be killed, and tyrants shall be severely punished by God."

[...]Hussein is currently on trial in a second case, charged with genocide and crimes against humanity for the killings of as many as 100,000 Kurds, many with poison gas, in the co-called Anfal campaign in 1987 and 1988. If the appeals panel rules against him and upholds his death sentence in the Dujail, Hussein could be executed before the conclusion of the second trial.

If these judges find grounds to question the judgment, Saddam will face another trial. If not, the sentence imposed this weekend will stand and be carried out within 30 days. Saddam and his seven co-defendants were put on trial for the killing of 148 Shi’ites from Dujail.

Iraqi Prime Minister Nouri al-Maliki gestures during a press conference after meeting tribal chiefs of Amarah province, flanked by unidentified tribal chiefs, in Baghdad Saturday Nov. 4, 2006. Iraq's prime minister on Saturday said the verdict in Saddam Hussein's first trial would be handed down on Sunday and that he hoped the former leader will be given "what he deserves." (AP Photo/Mahmoud Shehab, Pool)

We are preparing to celebrate tomorrow if he is sentenced to death," said al-Haidari, who lost seven members of his family to Saddam's alleged collective punishment of the city.

"Today we will remain awake waiting hour after hour for the verdict" he said. "We hope he will be executed here, where he committed his crime."

"We warn anyone who intends to exploit this event that our response will be tough and severe," Brig. Abdul-Karim Khalaf, the Interior Ministry spokesmanKhalaf said.

Saddam, wearing a dark grey suit and white shirt, initially refused to stand before judge Rauf Abdel Rahman as the verdict and sentence were read out. But he was brought to his feet by two bailiffs.

"You are servants of the occupiers, you are traitors," he said. "Life for us and death to our enemies, death to the enemies of the people.

"Long live this glorious nation and death to the enemies".

Judge Rahman said curtly to the court officials: "Take him out."

Saddam and his half brother to hang - International Herald Tribute

In Tikrit, Saddam's hometown, 1,000 people defied the curfew and carried pictures of the city's favorite son through the streets.

Some declared the court a product of the U.S. "occupation forces" and decried the verdict.

"By our souls, by our blood we sacrifice for you Saddam" and "Saddam your name shakes America."

People were celebrating in the streets of Dujail, a Tigris River city of 84,000, as the verdict was read. They burned pictures of their former tormentor.

Celebratory gunfire also rang out in Kurdish neighborhoods across the northern Iraqi city of Kirkuk, where taxi driver Khatab Ahmed sat on a mattress in his living room to watch trial coverage with his wife and six children.

"Thank God I lived to see the day when the criminals received their punishment," the 40-year-old exclaimed on hearing of Saddam's death sentence.

I have never been for the death penalty but in the case of a mass murderer at the head of a nation, there is no punishment that could be more appropriate.
Finally true justice.
Posted by D.C. at 10:58:00 am

Let me be the first to salute one moment of real justice. At least this monster's victims are not forgotten, and he will pay for what he did.

And for a study in contrasts I recommend the excellent brief interview with the admirable Tawfik Hamid posted over at Jihad Watch.

I will applaud when (if?) the sentence is executed.

Hopefully it will be a slow hanging.

"I will applaud when (if?) the sentence is executed. von Schlichtningen

Same here. However, today's verdict is a good start.

The man sentenced to death by a Baghdad court on the 5th November 2006 for crimes against humanity is not Saddam Hussein.

The Former Iraqi President died in March 2003. He was badly injured in intelligence-led precision bombing by the Americans on Thursday 20th March 2003, and died later that day or very shortly afterwards.

The individual currently held by the Americans under the name of Saddam Hussein is a politically expedient lookalike. He is a cousin of Saddam and his body language is completely different from that of Saddam himself. British and American intelligence organisations know this. It is also common knowledge in the Tikrit locality of Iraq.

Benjamin Creme, the Editor-in Chief of Share International Magazine, has privileged access to this information from inside Iraq. He sent a press release about Saddam's death to media and government authorities on Tuesday 8th April 2003.

Forgive me if I'm missing something obvious, but if Saddam was already dead what would be the point in trying a fake Saddam?