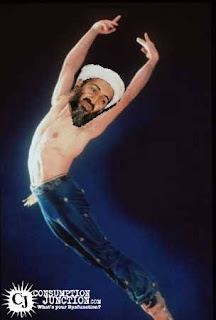 I've gotten so used to the pus-dripping pussy Osama Bin Laden threatening us that I have actually forgotten to acknowledge it this time.

Guys, Bin Laden is mortally threatening us once again.

When I read the transcript, I thought this is a call to war. Bin Laden said in no uncertain words, convert or die. And I wasn't the only one in the blogosphere. The media is talking about bad dye jobs but there is a serious message here. Here is an Atlas exclusive written by Dr. Paul Williams outlining the media deceit, taqiya.


The American media missed the most important part of Osama bin Laden's
videotape message, according to Pakistani journalist Hamid Mir.[http://hamidmir.com/]

Mr. Mir, the only reporter to interview bin Laden in the wake of 9/11,
said that the text of bin Laden's address may have been redacted by government
sources since a significant portion of it was not aired by major American news
outlets.

In the unaltered message, according to Mr. Mir, bin Laden says: "We
must sacrifice our lives to attack the enemy." This statement, Mr. Mir points
out, is a call for suicide attacks to take place throughout the United States -
- a call that was erased from official transcripts of the videotape.
These
suicide attacks, Mr. Mir believes, may involve the use of radiological devices
and/or tactical nuclear weapons.

Mr. Mir said that he had been informed by leaders of the Taliban in
Afghanistan that al Qaeda's long-planned American Hiroshima - - a nuclear attack
on seven to ten U.S. cities - - will occur in 2008 but could come sooner.

In June, ABC News reported that large teams of al Qaeda suicide bombers
had been sent to the United States, Great Britain, Canada, and Germany to launch
attacks at strategic sites. The report contained videos of hundreds of recruits
for these missions at a graduation ceremony in Pakistan. Some of the recruits
were as young as 12.

In August, four Islamic terrorists were arrested in Germany for
planning to strike German airports and US bases in commemoration of the sixth
anniversary of 9/11. It is important to note that those arrested were blonde,
German born converts, whose appearance allowed them to operate "under the radar"
of traditional profiling techniques and counter-terrorism protocols.
Mr. Mir
has long sounded the alarm of al Qaeda's plan to launch an American Hiroshima.
"As far as I know, they smuggled three suitcase nukes from Russia to
Europe," Mr. Mir maintained last year. "They smuggled many kilos of enriched
uranium inside America for their dirty bomb projects. They said in 1999 that
they must have material for more than six dirty bombs in America. They tested at
least one dirty bomb in the Kunar province of Afghanistan in 2000. They have
planned an attack bigger than 9-11, even before the attacks on the World Trade
Centre.9-11 took place. Osama bin Laden trained 42 fighters to destroy the
American economy and military might. Nineteen were used on 9-11, 23 are still
'sleeping' inside America waiting for a call from bin Laden."

Mr. Mir said al-Qaeda operatives told him that tactical nuclear weapons
were smuggled over the Mexican border before Sept. 11, 2001.

Asked why al-Qaeda hasn't used nuclear weapons it already possesses,
Mir said: "They are waiting for the proper time. They want the U.S. to be
involved in a mass killing of Muslims, so that they will have some
justification. That is what I was told by a top al-Qaeda leader in the Kunar
Mountains of Afghanistan."

Mr. Mir, whose biography of bin Laden is expected to appear before
Christmas, says that the al Qaeda chieftain is no longer in Pakistan but has
relocated to a remote mountainous area within the Khost and Paktia provinces of
eastern Afghanistan.

These and ten other Afghani provinces, Mir maintains, are now under the
rule of the Taliban.
The pipeline for jihadi supply troops, he insists, now
runs from the United Arab Emirates through Iran and into southern Afghanistan.

The Iranian-Taliban alliance is a new, unique and disturbing
development in the war on terror. When the Taliban came to power in 1996, Mullah
Omar and his army were decried by the Shiite mullahs in Iran for the massacre of
thousands of Shiite Hazaras and Panjshiri Tajiks. Iran began to send money and
arms to Ahmed Shah Massoud and his opposition army of Tajiks, Uzbeks, and
Hazaras that became known as the "United Front" or "Northern Alliance." The
Russians also came to the support Massoud's army to protect the interests of
Uzbekistan.

The Northern Alliance continued to receive support from Iran and Russia
until the launching of Operation Enduring Freedom (the codename for the U.S.-led
invasion of Afghanistan) Oct. 7, 2001. Overnight, the Iranian and Russian
advisers to Massoud became replaced by CIA operatives and Green Beret A team
members.

A major setback in the war on terror, according to Mir, is that Iran
and Russia are now allied in Afghanistan on the side of their old enemy.

The first major indication of Iran's change of heart toward the Taliban
came in the wake of the bombing of Tora Bora in December 2001, when Mullah Omar
and hundreds of his soldiers and al-Qaida agents, scaled the mountains between
the Afghanistan-Pakistan border, cut through the southern provinces of
Afghanistan and headed west to Iran, where they found safe refuge, thanks to the
intervention of Imad Mugniyah and the other leaders of Hezbollah. The newly
arrived guests included such luminaries as Saad bin Laden, Osama's eldest son;
Yaaz bin Sifat and Saif al-Adel, al-Qaida military planners; and Mohammed Islam
Haani, the mayor of Kabul under the Taliban. Within Iran, they were placed in
luxurious safehouses under the protection of SAVAMA, the Iranian intelligence
service.

When the war on terror moved to Iraq, Iran came to serve as a base of
operations for Abu Musab al-Zarqawi and other al-Qaida field commanders to mount
attacks on the occupying armies.

This monumental event – the union between Sunni and Shiite – remained
largely ignored by Western observers.

While the war dragged on in Iraq, Mullah Omar and other Taliban leaders
returned to Pakistan, gained thousands of new recruits, secured control of much
of the tribal areas, and launched the re-conquest of Afghanistan.

The Taliban soldiers are now accompanied by advisers and regulars from
the Iranian army and, according to Mir, within Afghanistan, Mullah Omar has
received visits from his old friend and fellow jihadi, Osama bin Laden.

Because of this newly forged alliance, Mr. Mir speculates that the
American Hiroshima may occur as soon as the Bush Administration launches an
offensive against Iran to prevent the Shiite country from becoming a member of
the nuclear club.

Well, this is disturbing news to come home to from having one of my best vacations ever. Welcome back to reality, I guess. Ugh.

But what the fuck.......Britney had her comeback performance...and was that "Just for Men" or a Photoshop job that darkened Osama's beard?

Well, it would be somewhat amusing, actually if Bin Laden had intended to directly signal to attack via the media... and it was removed as if it never happened.

This would be along the lines of Margaret Thatchers' idea of starving the oxygen of publicity for terrorists.

Imagine bin laden in a bit of strop in some cave... braking his toe as he kicks the wall at the removed part of the message...

and then we have chertoff coming right out and saying our ports will more than likely be threatened!

this gets more insane by the moment.

p.s. - a third tape is supposed to be released today i believe - if i heard the news correctly.

in the movie tombstone, wyatt and his peeps went out after every stinkin' terrorist with a red sash...we should be profiling...just me thinking out loud...