IBA Man Of The Year 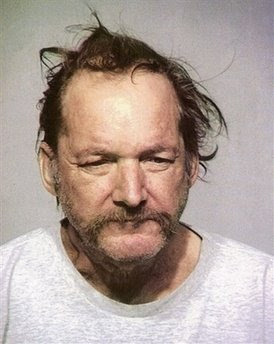 Sheer, unmitigated manliness
I think all real men (who've had to mow their own lawn at one time or another) can relate to this story.
I would have done the exact same fucking thing.
In fact, where's my machine gun? I'll go do it right now just to show solidarity.
From the Evil Press:

MILWAUKEE - A Milwaukee man was accused of shooting his lawn mower because it wouldn't start. Keith Walendowski, 56, was charged with felony possession of a short-barreled shotgun or rifle and misdemeanor disorderly conduct while armed.
According to the criminal complaint, Walendowski said he was angry because his Lawn Boy wouldn't start Wednesday morning.
He told police quote, "I can do that, it's my lawn mower and my yard so I can shoot it if I want."
A woman who lives at Walendowski's house reported the incident. (Pastorius comment: Well, naturally!)
She said he was intoxicated. (Pastorius comment: Wouldn't you be, having to live next to a bitch like that?)
Walendowski could face up to an $11,000 fine and six years and three months in prison if convicted.
A call to Walendowski's home went unanswered Friday morning.

Cool, he's like a Clint Eastwood character. He shoots, and then doesn't bother to answer questions.
What a man.
Posted by Pastorius at 1:24:00 am

Share this story with your husband. See if he agrees with me.

One time, I found a couple of black widows in a web underneath a wrought iron chair in my backyard.

The normal thing to do, in such a case, would be to hit them with a broom, or some bug spray, or something like that.

I set them on fire, just like Beavis from Beavis and Butthead.

And, I had fun doing it.

My wife probably wanted to divorce me, but wtf?

He can come over and fix my 92 Saturn any day.

Years ago, I seriously considered shooting my car. The car's "brain" kept screwing up.

Well, look at this. All the women are weighing in in agreement.

Am I the only man who's going to admit to this?

My opinion is, we're all only inches away from this guy. He did what we all want to do, but don't do, because we want to think we're more civilized.

By the way, AOW, I love that you "considered" shooting your car. The idea that we have to think it through at all is amazing, isn't it?

Pastorius,
It was the most beautiful car I'd ever owned. Now, had it been that ugly brown Bonneville, I'd have put it out of its misery.

BTW, I did physically attack my Bonneville from time to time. By the time I got rid of it, it had a lot of dents and scratches, thanks to my physical attacks. No kidding.

pastorius - we used to take the stun guns to spiders at a law enforcement agency i used to work for...

There are few situations in life that can't be solved w/the proper application of love or a 12 guage.

Nanc,
Glad to hear I'm not the only one who has used superior firepower on simple insects.

SamenoKami,
If only my wife would understand such logic.

AOW,
Honestly, I can't imagine you having done such things to a fine automobile.