Ilhan Omar: “I’m going to burn down everything around me by adding the fuel of my religion, skin color, gender or even tone” 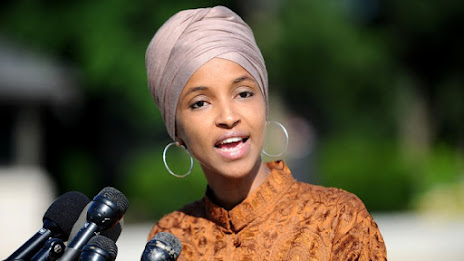 In her new book “This is What America Looks Like” Rep. Ilhan Omar (D-MN) writes “I am, by nature, a starter of fires. My work has been to figure out where I’m going to burn down everything around me by adding the fuel of my religion, skin color, gender or even tone.”

Omar is asked in a new NY Times interview “Couldn’t that kind of language be interpreted as a form of demagoguery? Why is it helpful to express yourself in those terms rather than, say, in terms of building things up? ”

Omar replies “It’s metaphorical. There are many times when people will say, “Something you said has agitated this space.” And it’s like, no, it’s me just showing up that did it. There are times when I will choose to not show up, because I know that my presence brings about intensity that isn’t going to be helpful. There’s no one else that exists in a space where they have to deal with the hate of anti-Muslim, anti-immigrant, anti-Blackness, but also with sexism.

"People will say it’s my “tone.” I’m like, you’re agitated by my tone because you think people like me should be sitting in a corner, not heard and not seen. Everything that comes out of my mouth is going to be filtered through the lens of you despising my existence.

"That’s the metaphorical adding-of-fire. That was a thing in the primary campaign” Omar added “Ilhan is divisive. My being given the mic to say anything is angering, regardless of what the hell I say. I could say, “Good morning,” and they’re already angry.”

This woman thinks way too highly of herself as a presence. And at the same time, she underestimates her own ability to be a terrible human being.

Let's elect a devout Muslim to Congress! It's a Religion of Peace! What could possibly go wrong..... ?

Sedition if she acts on it, certainly. Good luck with getting her sorry seditious little @$$ removed from Congress in any case.

RRA,
Maybe she has left a money trail that proves her sedition.

One of husseins islamic back door invaders?