Cruel Islam and Iran is the worst 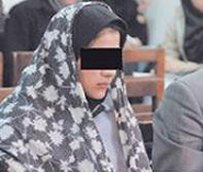 Nazanin, 17, was sentenced to death by hanging for defending herself against three rapists.

A young girl who defended herself and her chastity against three male assailants who intended to kidnap and rape her causing injury to one of them who later died in hospital was condemned to death by hanging in an Islamic court in Iran. Nazanin who has seen no more than 17 Springs, all of which under the tyrannical rule of the Mullahs is now facing execution for trying to defend herself and her honor... 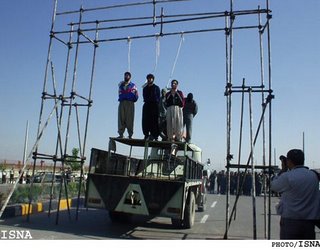 Islam Is The Real Source of Violence.

Human rights abuses happen in many countries, but never to the proportion and the magnitude of what is happening in Iran and other Islamic countries. In the last few years, and with no little thanks to the Islamic Revolution of Iran, I noticed that the major human right abuses are perpetrated in the name of religion. I became concerned for the plight of my people in Iran and her neighboring countries and decided to investigate the cause. I asked myself whether all this is because the gentle and peaceful message of Islam is misunderstood and whether there is a way to revive the pure Islam and save my country. It was in this quest that I realized, to my chagrin, that the human right abuses are not deviations from the true Islam but they ARE teachings of Islam.

I realized that in Islam, Man has no rights! All the rights are reserved for Allah. Man has only duties. Among his duties, he has to pray five times a day, believe in the religion of Allah and submit his will, thoughts and intelligence to him. Any independence from Allah, even at the level of thought is punishable by beating, imprisonment and death.

"People around the world are breathing a sigh of relief with the news that the possible execution of confessed Afghani Christian Abdul Rahman has been solved and he will now be free to return to his life, Most people also believe this is an isolated incident..."
Read Islam Doesn’t Mean Submission—It Means Death"
By Barbara J. Stock - Faithfreedom
2006/03/28 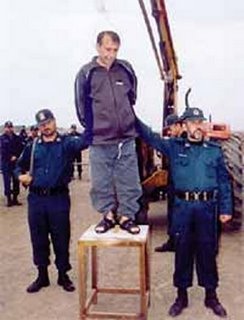 "Karim Fahimi was sentenced to death in June. The sentence has now been upheld
by the Supreme Court, and he could be executed at any time.

Karim Fahimi, a Kurd, who is married with two young children, was reportedly
sentenced to death for drinking alcohol, by a court in the city of Sardasht,
western Iran. It was at least the third time he had been convicted of the
offence: under article 174 of the Iranian Penal Code, the penalty for consuming
any intoxicant is 100 lashes; under article 179, this penalty may be handed
down twice, but a third conviction carries the death penalty."

WINE AND LIQUEUR (including beer, whisky, brandy, Martini, vermouth, gin, vodka, Champagne , Port, Sherry…) are great taboos in Islam. It is a great sin even to hold a bottle of one of these dreadful stuffs, not to talk of dropping a single drop of these haram liquids into one’s ( I mean, a Muslim’s) throat. Ask any Muslim and he will surely attest to what I have diligently written just now. There are severe prescribed (read Islamic) punishments for the production, distribution, sale, trading and consumption of these egregious products... Read it here. 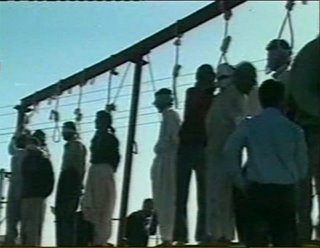 Savage Hanging in the Public - Qazvin
from Holy Crime
"Karim Fahimi, also known as Karim Shalo
Karim Fahimi has been sentenced to death in June 2005. The sentence has now been upheld by the Supreme Court, and he could be executed at any time.

Karim Fahimi, a Kurd, who is married with two young children, was reportedly sentenced to death for drinking alcohol, by a court in the city of Sardasht, western Iran. It was at least the third time he had been convicted of the offence: under article 174 of the Iranian Penal Code, the penalty for consuming any intoxicant is 100 lashes; under article 179, this penalty may be handed down twice, but a third conviction carries the death penalty... See more links

TEHRAN, Iran (AP) -- The condemned man kissed the rope.
”I am not scared'', Ahmad Dowlatyari shouted to the crowd that assembled at sunrise Monday to watch his hanging. “My life is now over. I want to go with a smile''.

A tow truck's crane rose with a hydraulic hiss. The orange rope stiffened. Dowlatyari (convicted of murdering his crime partner in a fight over stolen gold) gasped once and was dead..." Read the rest here.

"In one of his rare outings during the Iranian presidential election campaign last week, Ali-Akbar Hashemi Rafsanjani, the man then designated as the likely winner by almost everyone, ran into a spot of bother. An old woman broke through his security ring, shouting, "May I have a word with you?" Once allowed to approach Mr. Rafsanjani, the woman removed his turban with a blow and shouted, "No more mullahs!"

A couple of nights before that, Mr. Rafsanjani had been booed by students at Tehran University with cries of "mullahs back to the mosques!" Acknowledging the rising antimullah sentiments, Mr. Rafsanjani had himself photographed without a turban for the last posters in his forlorn campaign.

Mr. Rafsanjani was not the only mullah to experience the adverse tide of opinion. Ayatollah Muhammad Javadi Amoli, one of the regime's five "grand ayatollahs," was slapped across the face and shouted down from the stage as he tried to deliver a sermon supporting Mr. Rafsanjani in the holy city of Qom ... Read the rest here." 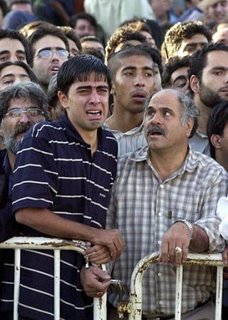 "...In his revealing case study, Afshari investigates how Islamic culture and Iranian politics since the fall of the Shah have affected human rights policy in that state. He exposes the human rights violations committed by ruling clerics in Iran since the Revolution, showing that Iran has behaved remarkably like other authoritarian governments in its human rights abuses. For over two decades, Iran has systematically jailed, tortured, and executed dissidents without due process of law and assassinated political opponents outside state borders. Furthermore, like other oppressive states, Iran has regularly denied and countered the charges made by United Nations human rights monitors, defending its acts as authentic cultural practices..."
Human Rights in Iran. The Abuse of Cultural Relativism
Reza Afshari

A volume in the Pennsylvania Studies in Human Rights series.
Selected by Choice magazine as an Outstanding Academic Title.
Book review, University of Pennsylvanian Press

"...The Islamic Republic remains one of the worst violators of human rights in the world. Proportional to its population, it holds more prisoners of conscience than any other nation. It leads the world in number of people executed for political reasons on false charges of moral and other "deviations"..."IRAN'S 'UNKNOWNS': FACE THE FACTS
By Amir Taheri
New York Post
March 15, 2006 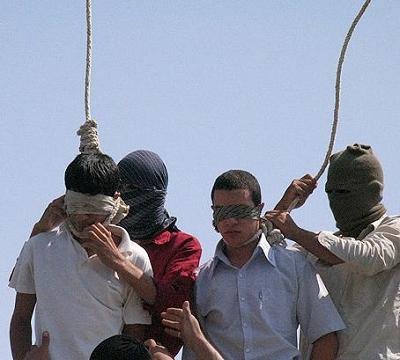 NCR-Iran.org July 2005
"...Before hanging the victims, the henchmen flogged each of them 228 times. The executioners wore masks fearing reprisals and anti-riot forces put the entire area under their control to prevent outbreak of public protests..."
The victims were charged with disrupting public order among other things. They had been imprisoned since 14 months ago, meaning that they were 16 years old at the time of the alleged offences ...Read it here. 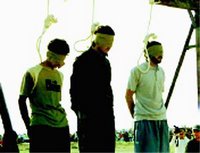 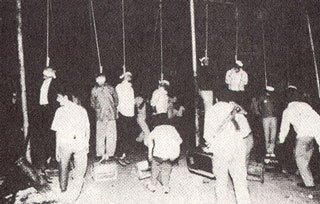 These pictures are disturbing. Do not scroll down if you can't stomach gory scenes:

The following distressing pictures are not from Abu-Ghorreyb or Guantanama. Otherwise they would have been all over the Western media and Kofi Annan would have made a song and dance about them..

They show the pictures of a murdered Iranian pro-democracy secular activist. That's why the Western media have not reported it... 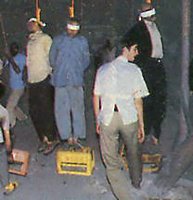 I was just six, I have got hope, you took it all of them with a bullet.
Kurdish Blog

This is an important post, Im linking in and x posting.

Gee do you think anyone is talking about DIVESTING from the company that makes the cranes they HANG these horrible people who might have 3 drinks from?

Thanks for posting this one. This epidemic of hangings is detestable. I have been stuck on this subject for months, especially after reading about Nazanin and Atafeh Rajabi. Atefeh got so angry in court that she removed her headscarf and gave a speech berating the system that had forced her into the "acts incompatible with chastity" for which she was on trial. Just a teen-ager, and she showed such bravery in the face of her trial and the judge bent on making an example of her. The judge was so angered that he reportedly refused her pleas on the way to the gallows of "repentance" (which would technically have led to a stay of exectution according to many) and proceeded to place the noose on her neck himself. I love her defiant face in her "mug shot". That picture haunts me and keeps me reading about this subject.

Unfortunately, my documents are filled with these horrible evidences of human cruelty against humans. This not a question of religion but a matter of deep rooted mental illness exacerbated by religious fanaticism that gives a cover of sanctity to what are otherwise totally barbaric acts.

One of the links from FaithFreedom, offers photos that will convince any one. See Pictures of Murdered Shoaneh Ghaderir, if you can stomach the brutality as Potkin Azarmehr says.

Epaminondas you can post the whole thing if you wish to do so.

Pim's you got it, she had the courage of removing her scarf, how many of us would have had the guts to do this? It reminds me of Fabrizio Quattrocchi who removed his hood and cried out before being shot, "Now I'll show you how an Italian dies!"
He was reported as the first to be murdered by kidnappers in Iraq.

Thanks my friends,
Diane

I have also posted part of the article with a link to the original on my blog (and also a photo on Flickr-- sometimes photos posted there generate a discussion-- its yet another place to make the information available). I think its important to publicize this-- since the mainstream media avoids this, many people in the west are actually not aware of what's going on.

'Can't keep up, you guys are so good at all that.

Another issues that merit serious attention are the kids raise in Islam such as the Palestinians children but also the others.
Then the human rights watch groups, who should improve their communication strategies. People are not aware enough, IMO.
Thx.