Our great NATO allies, the Turks, just KEEP ON PROVING WHO THEY ARE 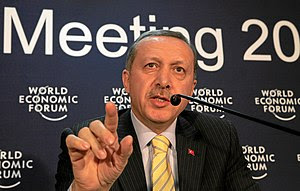 What's it going to take?

LONDON -- Israel has briefed at least one Western power on what was termed Turkish cooperation with nuclear shipments to Iran.

A senior Israeli official said Iran has been smuggling nuclear weapons-related components through Turkey with the awareness of its prime minister, Recep Erdogan.

"They were with Prime Minister Erdogan's full knowledge," a French Foreign Ministry cable said. Te French cable was released by WikiLeaks and reported on a strategic dialogue with Israel in October 2009. The cable quoted a briefing by Israeli Foreign Ministry director-general Yossi Gal to the Franco-Israeli Strategic Dialogue.

The cable was authored by French Foreign Ministry official Frederic Bereyziat, who expressed skepticism over the Israeli briefing on Turkey.

Gal and other officials were said to have warned that under Erdogan Turkey was moving away from NATO and toward such adversaries as Iran and Syria.

Over the last year, Turkey has defended Iran's nuclear program. The two countries were also increasing trade, particularly in energy.

On Dec. 1, Erdogan expressed fury over the leaked U.S. cables, particularly one from 2004 in which he was said to hold secret bank accounts in Switzerland.

The cable from then-U.S. ambassador Eric Edelman stated that the education of Erdogan's children was financed by an unidentified Turkish businessman.

A 2009 cable said Erdogan's friends were profiting from Turkish trade with Iran.

It was not clear how WikiLeaks acquired the French cable. The lion's share of cables and memorandums released on Nov. 28 were those from the U.S. State Department.

During the strategic dialogue, the French delegation, led by Foreign Ministry director-general Pierre Sellal, said it would require firm evidence of Turkish cooperation with Iran's nuclear program. The cable said the Israeli side responded that such evidence was being collected and would eventually be released.

Hi Epi.
For the lastt year i've been saying to kick them out of NATO!Erdogan was schooled as an future Imam why wiould he even consider to help non muslims?He's Ahmadinejads errand boy!