The link between Covid and cryptocurrency: How FTX and Sam Bankman-Fried bankrolled the lockdowns 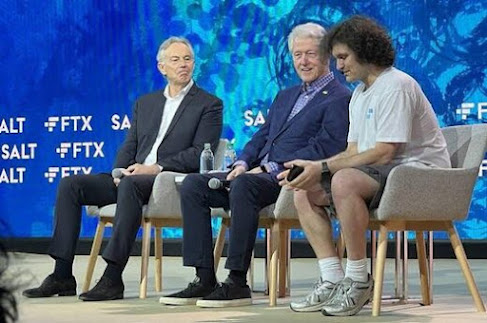 Sam Bankman-Fried, the disgraced CEO of FTX, the once high-flying but now belly-up crypto exchange, had the following to say about his image as a do-gooder: it is a "dumb game we woke westerners play where we say all the right shibboleths and so everyone likes us".

He had the whole game going: a vegan worried about climate change, supports every manner of justice (racial, social, environmental) except that which is coming for him, and shells out millions to worthy charities associated with the Left.

He also bought plenty of access and protection in D.C., enough to make his shady company the toast of the town. As part of the mix, there is this thing called pandemic planning. We should know what that is by now: it means you can't be in charge of your life because there are bad viruses out there.

As bizarre as it seems, and for reasons that are still not entirely clear, favouring lockdowns, masks, and vaccine passports became part of the woke ideological stew. This is particularly strange because Covid restrictions have been proven, over and over, to harm all the groups about whom woke ideology claims to care so deeply. That includes even animal rights: who can forget the Danish mink slaughter of 2020? Regardless, it's just true.

Masking became a symbol of being a good person, same as vaccinating, veganism and flying into fits at the drop of a hat over climate change. None of this has much if anything to do with science or reality. It's all tribal symbolism in the name of group political solidarity. And FTX was pretty good at it, throwing around hundreds of millions to prove the company's loyalty to all the right causes.

Among them included the pandemic-planning racket.

That's right: there were deep connections between FTX and Covid that have been cultivated for two years. Let's have a look.

Earlier this year, the New York Times trumpeted a study that showed no benefit at all to the use of Ivermectin. It was supposed to be definitive. The study was funded by FTX. Why?

Why was a crypto exchange so interested in the debunking of repurposed drugs in order to drive governments and people into the use of patented pharmaceuticals, even those like Remdesivir that didn't actually work? Inquiring minds would like to know.

Regardless, the study and especially the conclusions turned out to be bogus. David Henderson and Charles Hooper further point out an interesting fact:

"Some of the researchers involved in the TOGETHER trial had performed paid services for Pfizer, Merck, Regeneron and AstraZeneca, all companies involved in developing COVID-19 therapeutics and vaccines that nominally compete with ivermectin."

For some reason, Bankman-Fried just knew that he was supposed to oppose repurposed drugs, though he knew nothing about the subject at all. He was glad to fund a poor study to make it true and the New York Times played its assigned role in the whole performance.

It was just the start.

A soft-peddling Washington Post investigation found that Sam and his brother Gabe, who ran a hastily founded Covid nonprofit, "have spent at least $70 million since October 2021 on research projects, campaign donations and other initiatives intended to improve biosecurity and prevent the next pandemic."

I can do no better than to quote the Washington Post:

The shock waves from FTX's free fall have rippled across the public health world, where numerous leaders in pandemic-preparedness had received funds from FTX funders or were seeking donations.

In other words, the "public health world" wanted more chances to say: "Give me money so I can keep advocating to lock more people down!" Alas, the collapse of the exchange, which reportedly holds a mere 0.001% of the assets it once claimed to have, makes that impossible. Gabe Bankman-Fried ftx crypto collapse ukraine democrat donations Gabe Bankman-Fried

Among the organisations most affected is Guarding Against Pandemics, the advocacy group headed by Gabe that took out millions in ads to back the Biden administration's push for $30 billion in funding. As Influence Watch notes:

"Guarding Against Pandemics is a Left-leaning advocacy group created in 2020 to support legislation that increases Government investment in pandemic prevention plans."

Truly it gets worse:

FTX-backed projects ranged from $12 million to champion a California ballot initiative to strengthen public health programs and detect emerging virus threats (amid lackluster support, the measure was punted to 2024), to investing more than $11 million on the unsuccessful congressional primary campaign of an Oregon biosecurity expert, and even a $150,000 grant to help Moncef Slaoui, scientific adviser for the Trump administration's "Operation Warp Speed" vaccine accelerator, write his memoir.

Leaders of the FTX Future Fund, a spinoff foundation that committed more than $25 million to preventing bio-risks, resigned in an open letter last Thursday, acknowledging that some donations from the organisation are on hold.

The FTX Future Fund's commitments included $10 million to HelixNano, a biotech start-up seeking to develop a next-generation coronavirus vaccine; $250,000 to a University of Ottawa scientist researching how to eradicate viruses from plastic surfaces; and $175,000 to support a recent law school graduate's job at the Johns Hopkins Center for Health Security. "Overall, the Future Fund was a force for good," said Tom Inglesby, who leads the Johns Hopkins center, lamenting the fund's collapse. "The work they were doing was really trying to get people to think long-term... to build pandemic preparedness, to diminish the risks of biological threats."

Guarding Against Pandemics spent more than $1 million on lobbying Capitol Hill and the White House over the past year, hired at least 26 lobbyists to advocate for a still-pending bipartisan pandemic plan in Congress and other issues, and ran advertisements backing legislation that included pandemic-preparedness funding. Protect Our Future, a political action committee backed by the Bankman-Fried brothers, spent about $28 million this congressional cycle on Democratic candidates "who will be champions for pandemic prevention," according to the group's webpage.

I think you get the idea. This is all a racket.

FTX, founded in 2019 following Biden's announcement of his bid for the presidency, by the son of the co-founder of a major Democrat Party political action committee called Mind the Gap, was nothing but a magic-bean Ponzi scheme.

It seized on the lockdowns for political, media and academic cover. Its economic rationale was as nonexistent as its books. The first auditor to have a look has written:

Never in my career have I seen such a complete failure of corporate controls and such a complete absence of trustworthy financial information as occurred here. From compromised systems integrity and faulty regulatory oversight abroad, to the concentration of control in the hands of a very small group of inexperienced, unsophisticated and potentially compromised individuals, this situation is unprecedented.

It was the worst example of a phony perpetual-motion machine: a token to back a company that itself was backed by the token, which in turn was backed by nothing but political fashion and woke ideology ...

This is just unbelievable. Not because the article lacked credibility. It supports it's fact claims well.

What is unbelievable is how these people use any and all crises as an opportunity to use money. And then the face that the crisis becomes a cash enterprise means the crisis must be perpetuated.
AND NOW, as many of suspect, they are MANUFACTURING CRISES IN ORDER TO MAKE MONEY.
Posted by Pastorius at 12:52:00 pm

It was a racket which generated enormous wealth for a few global sphinx, including American sphinx.

Novus ordo seclorum. But not what our founders intended, but what our currency denotes. It IS all about the money.

That winner, is not "We the People". Are we really, still a Republic except in word and history? And on this Thanksgiving Day, let me make it abundantly clear that I am grateful for America. Our leadership? Not so much.