It Depends On What The Meaning Of "Grave" Is

George Bush declared, in a face to face meeting with Putin, that the situation with regard to the Russian invasion of Georgia is "grave." 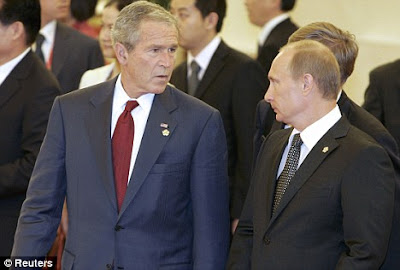 Does Bush know that, or this another one of his empty threats, like the kind he doles out to Iran every six weeks for the last five years?


Russian premier Vladimir Putin raised the stakes over the conflict by lashing out at the U.S. as the fighting continued to escalate in the region.

The Russian prime minister rejected calls from Georgia for a ceasefire and declared that his country would pursue its mission to its 'logical conclusion'.

A day after a face-to-face meeting with President George W. Bush in Beijing who expressed 'grave concern', Mr Putin accused the U.S. of siding with Georgia by ferrying Georgian troops from Iraq to the battle zone.

'It is a shame that some of our partners are not helping us but, essentially, are hindering us,' said Mr Putin. 'The very scale of this cynicism is astonishing.'

Russian Defence ministry spokeswoman Nana Intskerveli confirmed tanks had seized a Georgian military base in the western town of Senaki.

The statement indicated Russian troops had entered the region from a second rebel province of Abkhazia, where troops have been massing since the weekend.

There are concerns a new front away from South Ossetia could open up around Abkhazi, which would represent a major escalation in the conflict.

Thousands of troops, dozens of tanks and Hurricane multiple rocket launchers were seen pouring along roads to the south of Russia.

Russian warplanes also launched new attacks inside Georgia today, one on the outskirts of the capital and another on the Black Sea port of Poti.

Officials in the breakaway region today claimed Georgian troops had also resumed shelling there after its calls for a ceasefire were ignored by Russia.

President Bush warned Mr Putin of his 'grave concern' about the 'disproportionate' military intervention at a face-to-face meeting in Beijing yesterday.
Posted by Pastorius at 11:10:00 pm

Nothing more clearly shows the complete incompetence and moral bankruptcy of this admin at this point, than their failure to prepare for any contingency relating to this other than the AF at low levels being ready to evacuate the Georgian army contingent from Iraq back home.

Bush probably got a sneer to his face, and laughter after Putin closed the door

BASED ON BUSH'S BS FOREIGN POLICY THE LAST TWO YEARS, IT LOOKS LIKE OBAMA WILL BE CARTER'S THIRD TERM!

I agree with both of you, and I would rather not be correct here. I wish I were wrong.