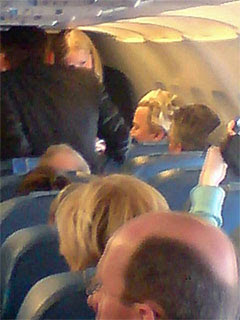 I cannot believe they actually did this.

The BBC says he is 'being held' by immigration officials.  The Dutch ambassador was waiting for him.

Is he already on his way back to Amsterdam?

It is understood that the controversial politician's passport will be flagged up at Heathrow immigration and he will be refused entry to Britain at that point.

Geez, the blimey brownshirts nabbed him on the tarmac!

His plane is still on the tarmac of Heathrow. On arrival, Mr Wilders was arrested, according to the BBC. A journalist of the Spits daily who is on board says that initially Mr Wilders was not being allowed off the plane.

We'll give him a strongly worded letter that'll show him.

Upon Geert Wilders' arrival at Heathrow Airport, he was presented with a letter from Britain's Home Office saying that his opinions "threatenen community security."

The rub?  The UK will put on the dog for an al Qaeda fundraiser, but they ban the democratically elected Dutch MP.

Critics of the UK government have said that the decision has headed to the Muslim lobby which includes Lord Ahmed who according to the Daily Mail journalist invited "an Al Qaeda terror suspect to Parliament".

Mr Mahmoud Abu Rideh was invited to Westminster according to the Daily Mail, an individual who was detained on suspicion of fundraising for groups linked to Al Qaeda. 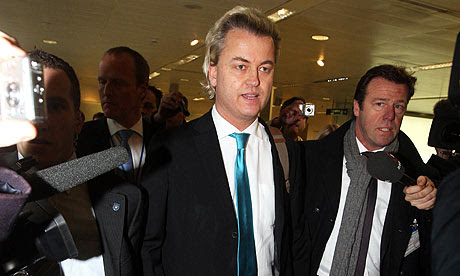 Well, it looks like they let him off the plane...why WAS he allowed to travel to the UK in December but now all of a sudden it's a problem...

On the plane from Amsterdam, the controversial leader of the Freedom party told Dutch journalists he had travelled to Britain in December without any fuss. "I don't see why there's a problem with me this time," he said. "I don't understand why they allowed me to come before and not now."

Geert sends the AP a text message saying he'd be home within an hour...

Dutch lawmaker Geert Wilders sent the Associated Press a text message confirming he would be returned home within the hour.

From the National Review, an open letter from the International Free Press Society.

The UK may try and silence him but it looks like Geert will be taking his Fitna show on the road...including the US.

Wilders said he had already shown his film to Denmark's parliament and intended to take it to Italy and the US House of Representatives in the coming weeks.

Speaking of free speech - Did you ever think you'd read about a newspaper editor getting arrested "for deliberate and malicious acts intended to outrage religious feelings"?  Guess which religion.  Anybody care to hazard a guess?

Sections of central Kolkata have been paralysed by protests for much of the past week after The Statesman republished an article by The Independent's columnist Johann Hari. Titled "Why should I respect oppressive religions?", the piece was originally printed in The Independent on 28 January. In it, Hari said he believed the right to criticise any religion was being eroded around the world.

The Statesman, a highly respected liberal English-language daily, reprinted the article on 5 February, causing a major backlash among a small group of Muslims who felt that the piece slighted the Prophet Mohamed and insulted their religion. Peaceful protests were held outside The Statesman's offices at the weekend but by Monday, demonstrations had turned violent. Angry crowds began blocking roads, attacking police and calling for the arrest of the article's author and the newspaper's publisher and editor. On Monday and Tuesday police used baton charges to try to disperse crowds and more than 70 protesters were arrested.

Staff at The Statesman were forced to barricade the front entrance to their building and were escorted into their offices through a side door by police. The office is opposite the Tipu Sultan Masjid, Kolkata's largest mosque.

The BNP are the only party opposing the ban on Wilders.

the irony of irony's rears its head again, free speach for me but not for thee. and call me and my religion opressive and violent and I will try to oppress and violently assault you, call my religion evil and murderous and I will kill you

Now why is it the BNP supports Wilders but we can't get mainstream parties to? The supposed Defenders of Freedom choose to silence free speech, being cowed by the politically correct minorities to go against everything they know to be morally right.

I'd give them Franklin's Liberty and Security quote but it would fall on deaf ears anyway.

Just for the record, IBA never supported the BNP. And, in fact, when we have been critical of the BNP, the response has been hundreds of comments from people use words like nigger and darkie, and who try to justify racism.

That being said, the BNP is the only party which is supporting Wilders. And, that is fucking pathetic. The Labor Party and the Conservative Party are chock full of Neville Chamberlains, apparently.

The BNP are the only party opposing the ban on Wilders.

Hold it right there

It is true that the BNP are opposing the ban, but they are not alone.

Wilders was invited by UKIP Peer Lord Pearson to go to the House of Lords to show the anti-extremist film fitna .

It was the UKIP that sponsored to show the Film

Among those waiting for Mr Wilders in arrivals was Gerard Batten, UKIP MEP for London

So please, by coming here with porkies does not shine a favorable light on BNP.

Shiva - thank you for posting the information about Gerard Batten, UKIP MEP for London waiting for Wilders in arrivals. . .I was concerned that Pearson wasn't at Heathrow to escort Wilders to the House of Lords, since it was Pearson who invited him.
Do you have a link?

How lame is this? All the major British parties flipping off Wilders like that? (Even Pearson and the UKIP seem to have backed down.)

In a sick way I'm not surprised-- my last "vacation" in England turned out to be a prolonged and largely fruitless exercise in "spot the Englishman." B/c there aren't any there anymore-- England might as well be a district of Calcutta or Accra at this point. So maybe the political parties are just adjusting to this sad fact, a demographic wave bigger than any since the Roman Empire crumbled and the Mongols were at the gates.

And I've certainly ragged on other European countries before, especially the Netherlands and France. But I have to grudgingly give them some credit for at least allowing Wilders to speak his views and even seek higher office, true to Voltaire's word. And the Dutch and French have actually gotten tough with their immigration laws, a few central European governments have even brought nationalist parties into power. So some outposts in the West seem to be fighting back, or at least making a start in that direction. Just sad that Britain has decided to capitulate.