Or: Another Step on the long way to the decontamination of the German history, performed at Israel's expense with the help of a "good" Jewess. (Henryk M. Broder) 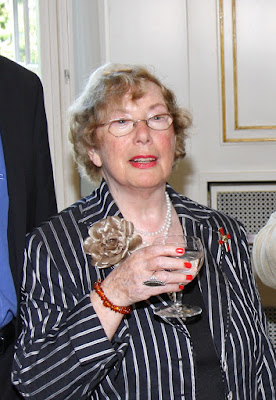 On July 16, 2009, Horst Köhler, president of the Federal Republic of Germany, issued the Bundesverdienstkreuz Erster Klasse (Federal Cross of Merit, first class, no less) the highest civilian order of merit, to the Israeli lawyer Felicia Langer for her lifetime achievement. She lives in the old university town of Tübingen.

Felicia Langer was born in Poland of Jewish parents. Her family fled to Russia in 1939, where her father died in one of Stalins prisons. In 1950 she went to Israel where, in 1965, she obtained a law degree from Hebrew University. After the Six-Day-War in 1967, she set up a private practice in Jerusalem defending Palestinians. In 1990, Langer ended her law practice and left Israel to live in Germany, accepting a teaching position at Tübingen university. In an interview with The Washington Post, Langer said "I decided that I could not be a fig leaf for this system anymore. I want my quitting to be a sort of demonstration and expression of my despair and disgust with the system... because for the Palestinians unfortunately we cannot obtain justice." To live in the country of the people who tried to murder her and her people was obviously the better, and in a way a logical, option.

Langer's main public identity stems from her vocal criticism of Israel, whom she compares with apartheid-South Africa, she is known for having praised the antisemitic speech of Iranian President Ahmadinejad in Geneva at the Durban II UN conference on racism and could, with some justification, tell the Jerusalem Post that the Bundesverdienstkreuz is a "recognition of my work".

Because indeed it is.

Asked by the JP about her interview with the German antisemitic (what is called "anti-Zionist" for some time now) website Muslim Markt, in which she argued that leading Israeli politicians and generals should be charged and convicted with war crimes at the International Criminal Court in The Hague, Langer replied that she considers Israeli representatives "war criminals" and that the "official translation" of Ahmadinejad's threat to "wipe Israel off the map" did not mean that Israel ought to be obliterated. President Köhler, when asked why he had awarded Langer with Germany’s highest civil award, remained silent and his press spokesman deferred the matter to the State Ministry in Baden-Württemberg, the federal state in which Tübingen is located. Uwe Köhn, a spokesman for the state of Baden-Württemberg, wrote in a mail to the JP that "the honor bestowed on Felicia Langer recognizes her humanitarian service, independent of political, ideological or religious motivation. Most important is her dedication to people in need, regardless of nationality or religion, given her own background as massively affected by the Holocaust. The decision to present the Order of Merit was made on the recommendation of the Lord Mayor of Tübingen, where Ms. Langer lives, with confirmation from all the usual departments involved in bestowing such honors, including the Foreign Ministry."

If it's through official channels it's alright. And to be honest, worse things than bestowing an award to somebody unworthy have been done this way in Germany.

According to Langer, the governor of Baden-Württemberg, Günther Oettinger, a Christian Democrat, praised her work in a letter and congratulated her on receiving the award, which is both, funny haha and funny peculiar (but then, maybe not), because Oettinger is the man who tried to turn his odious predecessor Filbinger from an old Nazi into a resistance fighter. We reported in 2007.

Even Dieter Graumann, Vice President of the Central Council of Jews in Germany, an organisation whose method of representing Jews in Germany can be aptly described as bidding for tickets on the next train to Auschwitz, had enough and stated that "Ms. Langer just a few months ago called the German Chancellor’s positive attitude toward Israel 'scandalous'. Now Langer is suddenly getting a Federal Cross of Merit- that’s a fatal signal, recognizing and legitimizing her fully one-sided agitation against Israel” and "Is this the introduction of a new fashion? Whoever criticizes Israel the loudest - especially if they are Jewish - is first in line for the Federal Cross of Merit?" Which may be a rhetorical, but nevertheless legitimate, question and can be safely answered with a resounding: "Very probably".

The lifetime achivement of Felicia Langer is remarkable indeed, from the winning of the "Right Livelihood Award" (shadows of Nazi-money looming) via the Human Rights Award of the "Gesellschaft zum Schutz von Bürgerrecht und Menschenwürde" (a collecting tank -- or rather cesspool -- for former StaSi-staff and other Stalinist cadre) to the preface she wrote for the book of Germano-Syrian (or is it Syrio-German?) antisemite Jamal Karsli, somebody we introduced in 2007 already as well.

However, nothing unmasks the German obsession with Jews coupled with a stubborn determination to remain staunchly at their side as long as they are safely dead or suicidal, better than Boris Palmer, the Green Party mayor in Tübingen, who had, like so many German Gutmenschen, previously played down Iran’s genocidal threats toward Israel. In a public email-exchange with Henryk. M. Broder, where he stated that Langer was criticising Israel "among other things", he had the nerve to thematize his own Jewish ancestry, to which Broder replied:

Frau Langer doesn't criticize Israel "among other things" but Israel ONLY. Has Frau Langer ever had anything to say about the treatment of women in Saudi-Arabia? Of homosexuals in Iran? Is there a statement from her regarding Chechnya or Georgia? Sri Lanka or Darfur? Has she ever risked to say a word about the persecution of the Baha'i? Expressed solidarity with the Tibetans or Uighurs? For all that she gives, upright and honest as she is, a rat's ass.

You, Herr Palmer, are a bandwagon-jumper of this boom when you are writing: "I say that as the grandson of a Jew...".

Cross-posted at Roncesvalles.
Posted by The_Editrix at 3:21:00 pm

" ..."the honor bestowed on Felicia Langer recognizes her humanitarian service, independent of political, ideological or religious motivation. Most important is her dedication to people in need, regardless of nationality or religion ..."


In a just Germany, such an award would be bestowed upon you, Editrix. You have no reason to defend the Jews as you so consistently do, other than your adherence to your Christian principles.

I admire you for that.

Editrix -- Just put a video up you may find interesting.

Thank you, Pasto! I said to somebody else recently that I am not what is covered by that awful cliché "friend of the Jews". I am just trying to be honest and truthful and to give everybody his due. You see, I know that typical German of my generation and the next younger one only too well. He (or she, for that) is obsessed with the Jews. He takes lessons in klezmer music and Yiddish and in between he goes to "Free Palestine" rallies, you know, because he considers it his duty to "stand with praise and censure at Israel's side as ethical probation officer to keep the victim from committing a second offence." We are talking about a clinical obsession here, and yes, he will consider himself a "friend of the Jews".

Wolfgang Pohrt, who coined that genius-level quip, used to belong to the "anti-German" left. Isn't it sad and doesn't it speak for itself that a leftist movement has to define itself as "anti-German" to be able to side with Israel and America?