DOJ (In Other Words, HOLDER) Secretly Drops Charges Against Florida Muslims Indicted For Aiding The Taliban 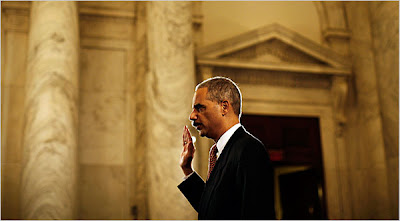 He is a danger to this nation.


The Department of Justice (DOJ) refuses to explain why it has abruptly dropped terrorism charges against a member of a Middle Eastern family indicted in south Florida last year with providing material support for the Pakistani Taliban.

In all, six people were charged with sending tens of thousands of dollars to the terrorist organization, which is associated with Al-Qaeda and has claimed responsibility for numerous attacks against American interests, including a 2009 suicide bombing at a U.S. military base in Afghanistan. The ringleader in this case is a Pakistani imam (Hafiz Muhammed Sher Ali Khan) who ran a mosque in Miami. The others include his sons, daughter and grandson.

Khan founded an Islamic school that supports the Taliban’s jihad while living in Pakistan and continued controlling and funding it as an imam in Miami, according to a federal indictment. He used the school to provide shelter and support for Taliban soldiers and to train children how to kill Americans in Afghanistan, the indictment says. The rest of the family helped create a network that flowed money from the U.S. to Pakistan to purchase guns for the Taliban, according to the feds.

The story made headlines nationally because the FBI raided the mosque with terrorist ties in a manner that assured cultural sensitivity towards Islam. Federal agents actually waited for prayer service to end before moving in out of respect for Muslims and they took their shoes off prior to entering the mosque as per Islamic tradition. It made for “kindlier, gentler arrests,” under the Obama Administration’s new rules of engagement to assure more sensitivity toward religious practices.
Keep reading…

UPDATE - Tim comments that this is evidence that the Obama Administration must have cut some sort of deal with Pakistan to allow us to continue drone attacks and get other behind the scenes concessions.

it's not a secret now. administration must have cut a deal in Pokeestahn.

Good point, Tim. I'll add that to the post.