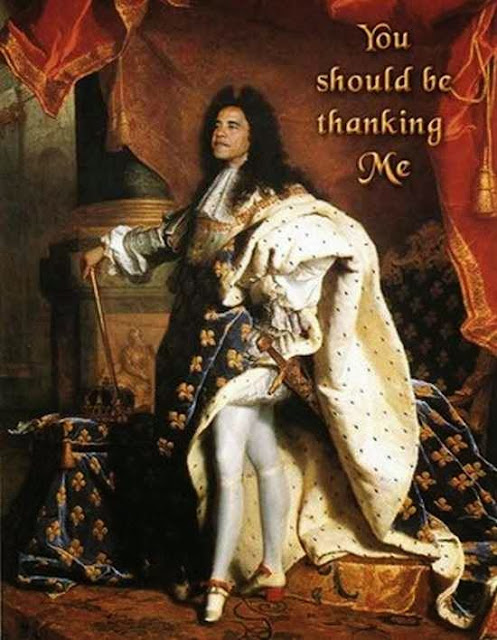 Get a load of THIS!


It’s time to put that power back where it belongs. When Ronald Reagan was serving his second term, some Republicans briefly floated the idea of removing term limits so he could run again. The effort went nowhere, but it was right on principle. Barack Obama should be allowed to stand for re election just as citizens should be allowed to vote for — or against — him. Anything less diminishes our leaders and ourselves.

I don’t even have the words… but I do have the CHILLS.
As James Taranto said this AM, we would be so much better off if the IRS could steal another one for Obama…
Posted by Always On Watch at 1:25:00 pm

I don't BELIEVE you picked the same pic... I will delete my post.

We should not be whining about whether a president should have more than two terms in the White House; we should be bemoaning the fact that men such as Washington, Jefferson, Lincoln, or Reagan are so scarce. Why are we so devoid of men of vision, of quality leadership, and over-endowed with such unremarkable as Jackson, Wilson, Truman, Clinton, and Obama?

You didn't have to delete it!

Can you believe it? I chose the same graphic that you did. Fits to a tee!

Epa,
Whenever you think you are being paranoid, you are not paranoid enuf.

What have i been saying all along? He won't go....reminds me of Mobutu......President for life.

Will,
President for life.

Do WE THE PEOPLE want that?

Does it even matter what WE THE PEOPLE want?

Cristina Fernandez and her minions in Argentina recently talked about allowing her to run for another election (and maybe even more after that) since Argentina too only allows two terms.

In recent midterm elections though her party failed to gain enough seats in the House and the Senate to be able to change the constitution (and support for her fell from 54% to 27% in a period of two years) so that dream of hers is over.

Seeing that America is still politically more sensible than Argentina, what is legally needed to change the constitution to allow for unlimited terms for a president?

BTW the guy writing the article seems to have no brains whatsoever.

It raises the politicians to more than they should be. Politicians are supposed to serve the people "within the bounds of the institutions set according to the constitution". In other words, the face or name of the politician shouldn't even matter. Contrary to diminishing anything, that is the republicanism we should all be striving for.

Would Washington, Jefferson, Lincoln, or Reagan have accepted the idea of President for life?

No, AOW ... that is part of what made them exceptional. Were you to ask me about the others, my answer would be different.

There has been some rumblings going on since about 2011, where the Democrats are hoping that the term limits will be repealed so that 0bama can run for a third term in 2016. To have him or any other Democrat occupying the White House for another term will be a disaster.

This subject has been appearing every four years for generations. It would take an amendment to the constitution to make it happen so I doubt it will get done, at least not any time soon. Thank God for that!