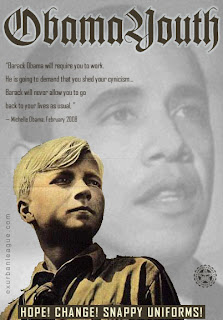 I must admit, I do not know what to think about this. But, I think it's interesting to note.
Baruch O'Bummer has declared:

"[W]e are going to grow our foreign service, open consulates that have been
shuttered and double the size of the Peace Corps by 2011 to renew our
diplomacy," said Obama. "We cannot to continue to rely only on our military in
order to achieve the national security objectives that we have set. We have got
to have a civilian national security force that is just as powerful, just as
strong, just as well funded."

This inconceivably vast proposal is hardly being mentioned by the MSM; just
a throwaway line in last week's speech about volunteerism. But what will this
"civilian national security force" do? Obama didn't say. Where will they get
their funding? Didn't say. Wouldn't this force be at least extra-constitutional,
if not unconstitutional?

Who would control them? Would service be mandatory like his other youth
"volunteer" initiatives?

At this same speech, he promised to withhold funds from school districts
that don't make their junior high and high schoolers serve 50 hours a year. 100
hours for college students, provided their type of service is deemed acceptable
by a sprawling new Federal bureaucracy.

Oh, and Obama's going to double the size of the Peace Corps while
quadrupling AmeriCorps. I'm curious if anyone will be left to fill all the newly
vacated private sector jobs. St.

Barack concluded his speech with this gem: "Loving your country must mean
accepting your responsibility to do your part to change it."

But what if I love my country the way it is?

Comments from LGF Quick Links:
Maryland already has compulsory service for HS students.
Another awful idea spinning out of control
This is a dangerous precedent. It is outside of Constitutional authority, The strategy here is obvious. It is to de-legitimize and weaken the national military by underfunding and binding it's hands behind the back by micromanaging and restricting effectiveness. This attack is happening via all elements within the branches of government. A civilian power outside the control and checks and balances of the Constitution. This makes it a corruptible via elements that control mob mentality and opinion. Who ever controls the Media will control this group.
Think Waffen SS.
He will have to have someone to enforce all those hate-speech and gun-seizure orders that conventional law enforcement and the military will refuse to accept.
The media will not call it conscription but it is. Draft riots anyone?
When an armed militia is armed, trained, and supported by the government, I think we can call this a National Military. (Pastorius note: But, what's the point? We already have a military.)

Consider this; it is connected, in my opinion (from Geraghety)
But If You're a
LGBT Environmental
Veteran Kid
Living Abroad,
You're Set
From this week's issue of The Economist:

Mr Obama seems to understand this, and is striving manfully to make it up
to Bubba. He has reversed his old view that the gun ban in Washington, DC,
(which the Supreme Court struck down last week) was constitutional. He stresses
that big cities and rural areas can have different gun laws, saying that “what
works in Chicago may not work in Cheyenne”.

He gave a rousing speech about
patriotism on June 30th, including an anecdote about sitting on his
grandfather’s shoulders watching American astronauts come to shore in Hawaii.
And the next day, he gave a speech in Ohio about faith.

But he has his work cut out. The “people” section on
his website divides Americans into 17 categories: Latinos, women, First
Americans, environmentalists, lesbian, gay, bisexual and transgendered people,
Americans with disabilities, Asian-Americans and Pacific islanders and so on.
There is no mention of whites, or men.

If they created a "Whites for Obama" or "Men for Obama" section, would there be objections?
Posted by Pastorius at 1:45:00 am

Whites are not Americans, apparently.

Am I getting pretty good at the Obama logic, or what?

Sounds like a second military to me. What for?