No end in sight to U.S. economic crisis as 'scariest jobs chart ever' shows post-recession unemployment is at its worst since World War Two
By Daily Mail Reporter
Last updated at 2:09 PM on 6th December 2010

As unemployment in the U.S. nears the dreaded 10 per cent mark, it is a chart to chill the bones of any job hunter.
Comparing previous recoveries from all 10 American recessions since 1948 to the current financial crisis, the stark figures show almost no improvement in employment figures in the past year.
Some commentators have described the comparison as 'the scariest jobs chart ever', pointing to the fact that only the 2001 recession took longer to bring employment back to pre-crisis levels. 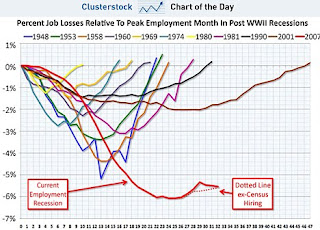 Number of months after peak employment

Even then, the total percentage of jobs lost bottomed out at two per cent, compared with six per cent this time round.
The job chart will heap further pressure on Barack Obama's attempt to stimulate the economy as plans were drawn for a temporary extension of the Bush-era tax rates for all taxpayers.
The bipartisan economic package would also extend jobless benefits for millions of Americans.
Differences remained over details, including White House demands for middle and low-income tax credits.

But Republicans and Democrats appeared to come together yesterday, raising the possibility of a deal in Congress by the end of the week.

The action is needed to prevent the delivery of a tax hike to all taxpayers at the end of the year when the current rates expire and revert to higher pre-2001 and 2003 levels.