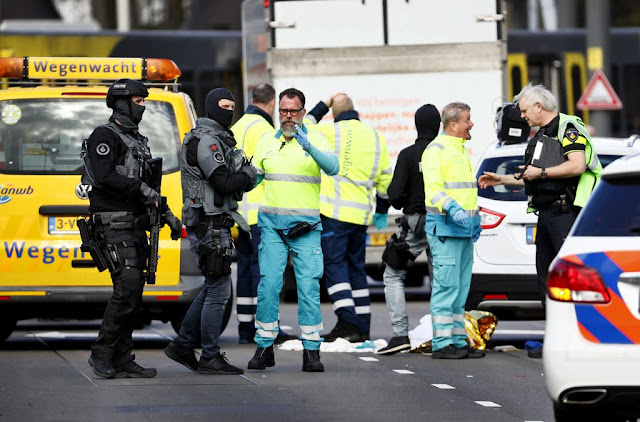 A shooting attack on Monday in the Dutch city of Utrecht that left several people injured was being investigated as a possible case of terrorism, the authorities said.

The Netherlands’ main counterterrorism agency raised its assessment of the threat in Utrecht province, just southeast of Amsterdam, to the highest level, and said it had activated a crisis team.

Trauma helicopters have been sent to the scene, the Utrecht police said on Twitter, and trams in the city have been shut down while the authorities investigate.

Latest shift in narrative:
Turkish 'terror' suspect 'shot a relative on Dutch tram "for family reasons" and then fired at anyone who tried to intervene' https://trib.al/SmrYpqH

Turkish suspect in Dutch tram shooting 'has previously been quizzed by police for crimes including rape', local media claim
https://twitter.com/MailOnline/status/1107672966463213572

A Turkish businessman told BBC Turkish that Gokmen Tanis, the suspect of Utrecht shooting, went to Chechenya to fight, and had been arrested and released a couple of years ago on charges of having links to ISIS
https://twitter.com/ecegoksedef/status/1107642439408513024

Lickity split...DailyMailAustralia provides excuses for the shooter:
Christchurch mosque shooter was badly picked on as a child because he was 'chubby' - so he turned to violent video games, sparking a downward spiral
https://twitter.com/DailyMailAU/status/1107399212638134272