THREAT TO THE HUMAN RACE: Fauci Paid Tunisians To Cage Beagle Puppy's Heads So They Could Be Eaten Alive By Sandfleas 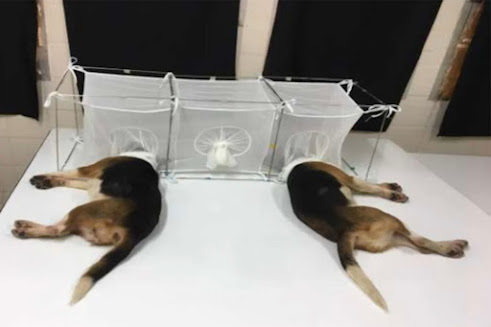 A group of 24 bi-partisan lawmakers are demanding answers from Dr. Anthony Fauci after a nonprofit claims he permitted experimental drug testing on dogs

The White Coat Waste Project alleges that Fauci sent $375,800 to a Tunisian research lab where beagle puppies were force-fed a new drug

This apparently barely touches the surface of Fauci’s animal cruelty

Now, these are experiements on animals.  So, why do I say he is a threat to the human race?

Ask yourself, what would be the purpose behind this experiment?

The monkey testing, which was first unveiled by the White Coat Waste Project in 2019, has cost taxpayers 'nearly $100 million just since 2007'

Will blog about the second revelation regarding the primates. I consider Dr. Fauci to be criminally insane. Having done psych nursing, I have cared for people who appeared "normal" but would kill if the back is turned.