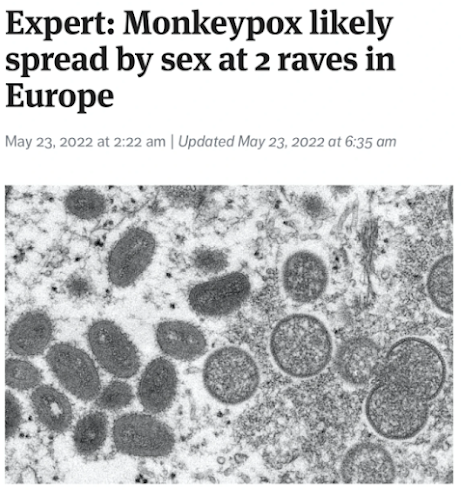 Once again, honesty is going to prove tough for the public health authorities

Are you a gay man? Specifically, are you a gay man who likes sex with lots of other gay men? Maybe in a bathhouse? Maybe names optional? Maybe with a meth bump on the side?

No? Are you sure?

It’s cool if you are, no judgments.

on’t worry about the monkeypox thing then.

On the one hand, they’ve almost got another epidemic on the go – the perfect way to distract the shiny-haired robots in the media from the complete failure of the mRNA vaccines.

On the other, the monkeypox epidemic – stop me if you’ve heard this before – very much appears to be centered around the sexual practices of gay men. (And bisexual men, also known as gay men who want to pretend they’re straight.)

In this, monkeypox joins not just HIV, but syphilis, gonorrhea, and a bunch of other nasties.

The state of California – that hyper-conservative hotspot – reports that gay men are hundreds of times more likely to get syphilis than straight men or women.

Alex Berenson has the whole story.

There are some things - like drinking out of a toilet - that do speed along epidemiology and pandemic.