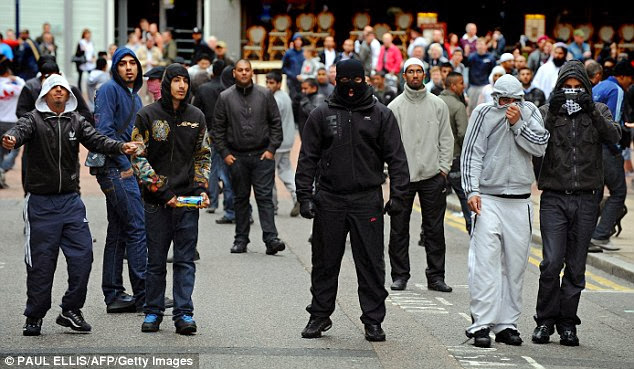 I'm quite sure this is going on here in the United States too. And, if it is, then RICO is the solution. You could shut down not only the terrorists, but the businesses, and the Mosques too. If you could show a pattern of this behavior at Sunni Mosques in the U.S., you may be able to shut down the 80% of Mosques throughout the country that are FUNDED BY SAUDI ARABIA, all in one fell swoop.

The common denominator will be tracing Zakat (Islamic charity): WHERE IT COMES FROM AND WHERE IT GOES.

JUST BECAUSE IT IS RELIGIOUS DOES NOT MEAN IT IS NOT CRIMINAL BEHAVIOR TIED TO JIHAD AND THE TREASONOUS ESTABLISHMENT OF SHARIA.


City gyms, cafes and restaurants used for recruiting extremists, say police. A top-level police report has revealed crime gangs in Birmingham are funding terrorism. And the criminal groups now run 59 legitimate businesses in the city, often using them to launder money made from drug dealing, robberies, and even gun-running.

The potential threats facing Birmingham and its residents is laid bare in a detailed report compiled by the Assistant Chief Constable of West Midlands Police, Sharon Rowe. It was written for Birmingham Community Safety Partnership, involving members of the city council, probation service, police and fire service.

The report, published online, confirms there are currently 28 organised crime gangs (OCGs) operating in the city and highlights the scale of their operations and influence. But it is believed there are 306 OCGs whose criminality affects Birmingham.

The report states the Birmingham gangs now run 59 legitimate businesses, often using them to launder proceeds from their criminal activities, which include drug dealing, robberies, car key burglaries and even gun-running.

They include pubs, car washes and sandwich shops, which normally deal in cash. For the first time, the report also reveals some of the groups are believed to be funding terrorism. It states: “There is evidence that some Birmingham OCGs use the profits from crime to help fund terrorist activities.”

Hotspots identified for OCGs in some areas of the city are also the most vulnerable for terrorism, the report says. It talks in more general terms about possible future terrorism threats in the city, following recent court cases.

They include the jailing of Birmingham-born extremists like Irfan Naseer, Ashik Ali and Irfan Khalid who led a suicide bomb plot that could have been ‘bigger than 7/7’.

They are not named in the report. Counter-terrorism led Operation Gamble, which uncovered a Birmingham plot to kidnap and behead a Muslim soldier, is mentioned by name in the report, but not ringleader Parviz Khan, 37, who was jailed for life.

The document says: “In Birmingham, work is underway to target those involved in facilitating and supporting terrorism. “There is an inherent risk that networks engaged in support activities, such as fundraising, may launch attacks.

“This type of progression has been seen before in Birmingham, as demonstrated by sentences handed out to local residents for offences under the TerrorismAct

They were doing that HERE with hijacked cigarette cases

Yep, and it is also the Mafia's model.

If this were the Mafia we'd be shutting it down with RICO.

But since it's a religion, we treat it with kid gloves.