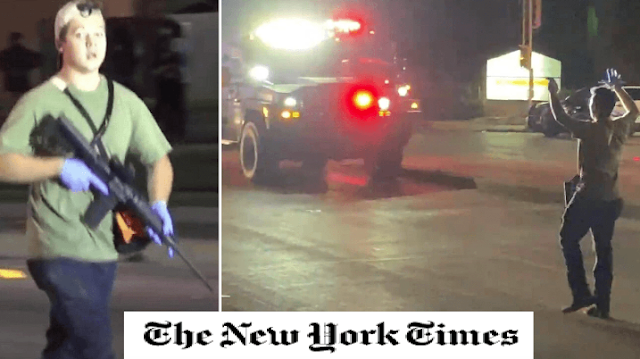 In a surprising turn of events, the New York Times has done some actual, real investigative reporting and confirmed Revolver’s conclusion that the Kyle Rittenhouse shooting is an open-and-shut case of self-defense.

Shockingly, the evidence turned up by the New York Times actually strengthens the case for self-defense. It turns out that, before the first shooting, Rittenhouse was being chased by a gunman who actually fired a shot into the air.

This little detail was actually missed by Revolver News in our initial review of the evidence. We did not realize that, in the first shooting, Rittenhouse was being chased by a gunman.

To better understand what happened next, we synchronized 6 livestreams, which revealed that there were two separate shooting incidents, about one and a half minutes apart, involving multiple gunmen.
— Christiaan Triebert (@trbrtc) August 27, 2020


From the NYT analysis:

First shooting While Mr. Rittenhouse is being pursued by the group, an unknown gunman fires into the air, though it’s unclear why. The weapon’s muzzle flash appears in footage filmed at the scene. Mr. Rittenhouse turns toward the sound of gunfire as another pursuer lunges toward him from the same direction. Mr. Rittenhouse then fires four times, and appears to shoot the man in the head. [New York Times]

Only in a truly clownish world can a man who is being chased by an armed mob not fire a gun in self-defense after exhausting his duty to retreat.

We did not realize that, in the first shooting, Rittenhouse was being chased by a gunman.

Throw out the case!

After he saved his own skin, he walked down the street with arms raised stating that he had just killed someone. There were not whoops of joy. I detected remorse, for having taken a life.

I saw the gun the first time I saw the video. WE have to be observant, and also realize that what we see may still not be in context to the complete event.

Media? They reported that he fled the scene.

Nope. He tried to attract the attention of the police.

It is a clear case of self defense. Outnumbered, on the ground, and the surrounding mob with weapons of choice which are already being wielded and aimed at his cranium.