Hero 2009! Kaffir of the Moment! Infidel of the Year Award! Jasper Schuringa!

His name is Jasper Schuringa: 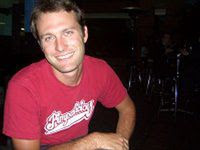 The passenger who tackled a suspected terrorist on Northwest Airlines Flight 253 said Saturday that he’s “happy” to be alive.

Jasper Schuringa, a video director and producer from Amsterdam, told CNN how he helped the cabin crew to subdue Umar Farouk Abdulmutallab, the 23-year-old who reportedly ignited a small explosive device on board the plane Friday as it prepared to land in Detroit.

Schuringa said he heard a sound that reminded him of a firecracker and someone yelling, “Fire! Fire!”

But he was only certain something was wrong when he saw smoke. He saw Abdulmutallab's pants open and he was holding a burning object between his legs.

"I pulled the object from him and tried to extinguish the fire with my hands and threw it away," Schuringa said.

He said he then screamed for water and pulled Abdulmutallab out of his seat and dragged him to the front of the plane.

Schuringa told CNN that Abdulmutallab seemed out of it and "was staring into nothing."

To ensure the suspect did not have other explosives on his body, Schuringa stripped off Abdulmutallab's clothes. He then handcuffed the alleged attacker with the help of a crew member.

Schuringa said the other passengers applauded as he returned to his seat and that he sustained minor injuries during the take down.

And your fellow travelers are happy you were there as well Mr. Schuringa.

His Facebook page is here... I suspect he'll get a ton of friend requests.

There were no air marshalls on board? I have flew out of Amsterdam in February '08 and the security, to me at least, seemed rather lax on the out bound flights.

Was this jihadi drugged up beyond comprehension? If so, there was a guardian angel working with this plane load of passengers as well. Had Farouk been in control of all of his mental faculties (to the extent islam prevents such control) this situtation would have had a very different outcome.

Wait on verification of this one, but it's reported online that Umar Farouk Abdul Mutallab's incredible poverty and political connections may have also afforded him an interpreter at the airport to explain his lack of passport.

"I was on this flight today and am thankful to be alive. My wife and I were returning from an African safari and had this connecting flight through Amsterdam. I sat in row 27, which was 7 rows behind the terrorist. I got to see the whole thing take place and it was very scary. Thanks to a few quick acting people I am still alive today.
For those of you talking about airline security in this thread, I was next to the terrorist when he checked in at the Amsterdam airport early on Christmas. My wife and I were playing cards directly in front of the check in counter. This is what I saw (and I relayed this to the FBI when we were held in customs):


An Indian man in a nicely dressed suit around age 50 approached the check in counter with the terrorist and said "This man needs to get on this flight and he has no passport." The two of them were an odd pair as the terrorist is a short, black man that looked like he was very poor and looks around age 17(Although I think he is 23 he doesn't look it). It did not cross my mind that they were terrorists, only that the two looked weird together. The ticket taker said "you can't board without a passport". The Indian man then replied, "He is from Sudan, we do this all the time". I can only take from this to mean that it is difficult to get passports from Sudan and this was some sort of sympathy ploy. The ticket taker then said "You will have to talk to my manager", and sent the two down a hallway. I never saw the Indian man again as he wasn't on the flight. It was also weird that the terrorist never said a word in this exchange. Anyway, somehow, the terrorist still made it onto the plane. I am not sure if it was a bribe or just sympathy from the security manager.

@ HotAir
One passenger says that the terrorist’s pants were “on fire,” which corroborates the reports of severe burns he suffered. However, the next passenger interviewed reported that the terrorist was calm, not in shock at all. In other terrorist attacks, such as in Mumbai and Afghanistan, the terrorists got themselves so high on drugs that they were unable to feel pain. It sounds as if that may have been the case here, because anyone who had those kinds of burns — by some report, third-degree burns — would not be sitting calmly unless heavily medicated.

This is nice to hear. Its always nice to hear about people standing up to and stopping Jihadists in their tracks.

Hmmm, Abdulmutallab..that sounds sort of Spanish or possibly Inuit or something.

Why oh why is this kind of stuff
still haaapening!?