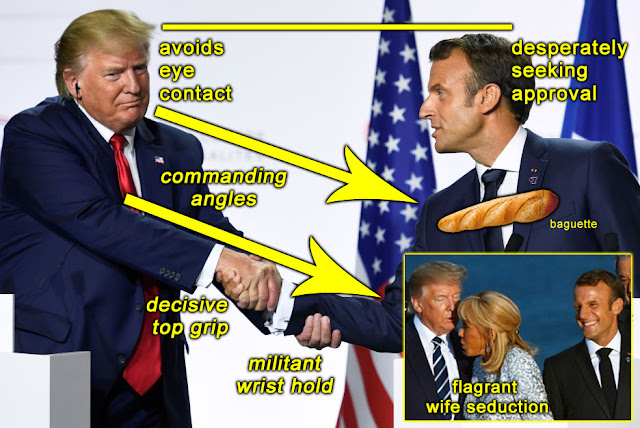 President Donald J. Trump asserted an imposing physical dominance over his fellow world leaders at the G7 Summit in France, a Free Beacon analysis has found.

According to the analysis, Trump's unapologetic display of American dominance stands in marked contrast to the supine deference of his predecessor, Barack Obama.

Here's a sampling of what our analysts found:

Britain's #Queen Elizabeth has approved Prime Minister Boris Johnson's plan to suspend parliament, a statement from the official body of advisers to the Queen, known as the #PrivyCouncil, said on Wednesday.
https://twitter.com/SaraCarterDC/status/1166718331728084992

Facebook Slaps Kassam With 30 Day Ban Ahead Of Brexit Deadline
Raheem Kassam, former senior advisor to Nigel Farage and former editor-in-chief of both Breitbart London and Human Events, has been...

Went to that body language site and thought I hit The Onion. No one backs the president more than I do, but the article had me laughing, maybe more like laughing/gloating at the feckless libtards formerly in power