Hospitals bribed to put patients on pathway to death 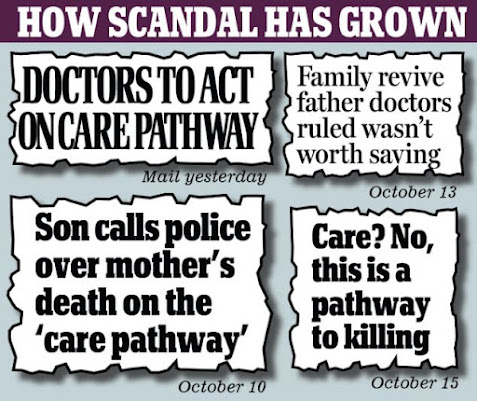 Hospitals bribed to put patients on pathway to death

Hospitals are paid millions to hit targets for the number of patients who die on the Liverpool Care Pathway, the Mail can reveal.

The incentives have been paid to hospitals that ensure a set percentage of patients who die on their wards have been put on the controversial regime.

In some cases, hospitals have been set targets that between a third and two thirds of all the deaths should be on the LCP, which critics say is a way of hastening the deaths of terminally ill patients.

At least £30million in extra money from taxpayers is estimated to have been handed to hospitals over the past three years to achieve these goals.

Critics of the method warned last night that financial incentives for hospitals could influence the work of doctors.

The LCP involves withdrawal of life-saving treatment. Patients are sedated and most are denied nutrition and fluids by tube. On average a patient put on the Pathway dies within 29 hours.