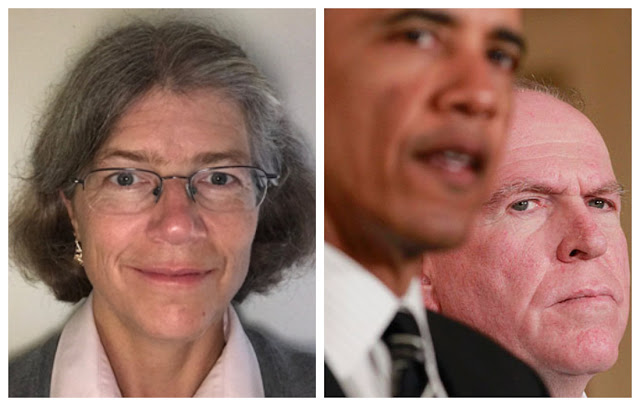 
on Rush Limbaugh Acknowledges The Communist Sympathies of Anti-Trump Putschists Nellie Ohr And John Brennan
During a segment today (8/30/2018) entitled “What We’ve Learned from Bruce Ohr’s Testimony,” Rush Limbaugh  acknowledged (transcript) that at least two key anti-Trump putschists, Nellie Ohr and John Brennan, are (at minimum) Communist sympathizers.
“Bruce Ohr, who was ranking in the Department of Justice, his wife Nellie ranking in the Department of Justice, FBI, she, by trade, is a Soviet communist expert of long-standing and many believe an apologist. And there were many of those all through the seventies and eighties and even prior to that in the State Department, at the Department of Justice. We have had plenty of communists and Soviet sympathizers. Brennan, Obama’s CIA director, could be said to have been a communist sympathizer. He voted for Gus Hall, the Communist Party candidate, 1976. How does a guy that votes for a communist end up as CIA director? But it happened.”
Limbaugh’s schematic declarations are supported by the following evidence, in summary.
My colleague Diana West performed a detailed “exegesis” of Nellie Ohr’s writings in The American Spectator, 2/22/2018, including Ohr’s PhD thesis. West elegantly summarized these themes in a subsequent radio interview:
“Ohr writes: ‘To introduce students to the Stalin era can be a frustrating task. To convey the terror and excitement of the period, one can assign a memoir of a prison camp victim or an observer such as John Scott or Maurice Hindus.’ Terror and excitement? Not incidentally, Maurice Hindus was an epic Soviet apologist. As for John Scott, Whittaker Chambers i.d.’d him in Witness as belonging to the cabal inside Time magazine that tried to get the ex-Communist witness fired; much later (to be fair, probably after Ohr wrote her review) Scott was revealed to have infiltrated the OSS for the NKVD (codename ‘Ivanov’).”
“For someone to be an apologist for Stalin’s policies for example the [Soviet] state moving into agriculture or how it worked in the aftermath of this tremendous upheaval and miserable period [i.e., the 1930s Ukrainian Terror-Famine, which killed 14.5 million per Robert Conquest’s “The Harvest of Sorrow”, p. 301] does say a lot about how she looks at government and what the government should do. In other words it is a very revolutionary attitude to believe that there could be ‘stabilization.’ [i.e., via Terror-Famine policies]. She writes about the ‘paradoxes’ of the Stalin era, which of course tells us that there were features of that era she found to be beneficial to her utopian vision of how people were told to live. So we have that mindset at the heart of that [fraudulent anti-Trump] dossier scandal, where the ends justify the means.”
More recently, my own essay (“John Brennan’s Useful Idiocy For Stalinism and Sharia”) elaborated John Brennan’s specific Communist, and more broadly totalitarian sympathies:
“John Brennan has admitted casting his 1976 POTUS vote for Communist Party (CP) of the USA leader Gus Hall. An ardent, unrepentant Stalin acolyte, who maintained the CPUSA as  “a bastion of Stalinist orthodoxy for four decades,” Gus Hall, circa 1976, was virulently anti-American, and an overt champion of the “liberating” hegemonic Soviet Communist terror state under Communist dictator (and Hall’s “Comrade”) Brezhnev. Hall articulated these views in a 1975 “Report to the 21st Convention of the Communist Party”: ‘Détente is not an agreement to accept, or to turn one’s head from oppression by [US] imperialism anywhere. Comrade Leonid Brezhnev made this clear in a public statement here when he stated: ‘The Soviet Union’s support for all national liberation struggles and movements is non-negotiable.’
Consistent with this 1976 vote for American Stalinist Gus Hall as POTUS, John Brennan, in his 1980 University of Texas MS thesis, adopted the moral relativism one associates with the Communist movement. Brennan declared‘absolute human rights do not exist,’ rendering ‘[human rights] analysis subject to innumerable conditional criticisms,” rejecting free speech and Western liberty as universal values,  and rationalizing both Soviet Communist, and Egyptian Muslim authoritarian-theocratic totalitarianism. He proffered this unsettling apologetic for the appalling human rights record of the Brezhnev era Soviet Union (although Brennan refrained from labeling the Soviet dictator Comrade Leonid Brezhnev): ‘Can human rights violations in the Soviet Union be as easily justified in terms of the preservation of the communist ideology? Unfortunately (looking at events from a democratic perspective), yes. Since the absolute status of human rights has been denied, the justification for the violation of any of those rights has to be pursued from a particular ideological perspective. Leonid Brezhnev could justify human rights violations in the Soviet Union as a necessary part of the preservation of the communist ideological system.’ ”
Useful idiocy—or worse, material support— for Stalinism comports well with the central roles Nellie Ohr and John Brennan have played in orchestrating the manufactured “Trump-Russia collusion” faux narrative, which has evolved into a seditious, full-blown attempted putsch.
Posted by Pastorius at 3:13:00 pm