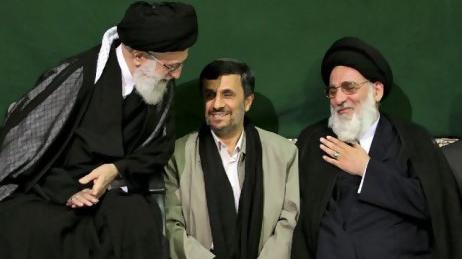 "We'll Give The Lefties Reason
To Say "Muslims Love Jesus Too",
And Then The Infidels
Will Fight Among Themselves Even More
It'll Be Funny As Hell"

Oddly...it appears both Ayatollah Kamenei and Mahmoud Ahmadinejad were in on the Christmas greetings this year as well. WTF are they up to now?
The value of #Jesus Christ (peace be upon him) to Muslims is definitely no less than the value, worth and esteem he has in the eyes of the Christian believers.

Ahmadinejad, who once declared, “I will stop Christianity in this country” while he was the president and whose tenure was characterized by the brutal repression of pro-democracy dissidents, also wished his Twitter followers a happy new year.

Iran, an Islamic theocracy, severely curbs the practice of faiths other than Shiite Islam. The Christian minority present in Iran is believed to number at around 350,000 and often suffers legal repercussions for not practicing the regime’s faith.
Posted by Pastorius at 3:19:00 pm

Jesus is greater than Muhammad or they are not talking about the Christian Jesus.

Isa is not Jesus. "Far be it from Allah to have begotten a Son."

Isa is the claymation Islamic version of Divinity.

Muslim's are intellectually incapable of making the subtle distinction, the sublime concept that makes belief in Jesus the Christ so unique.

The reason they say,

"The value of Jesus Christ (peace be upon him) to Muslims is definitely no less than the value, worth and esteem he has in the eyes of the Christian believers"

is because they think we are filth, beneath them, and thus any love or reverence we could offer up is always beneath that of even the lowliest Muslim.

... and of course, most of what they say about Jesus is Taqiiyya anyway.