Rex Tillerson Vs Nikki Haley: Tillerson Tried To Undermine Trump On Jerusalem, Nikki Haley Kicked The Shit Out of Him In a Shameful Backroom Beatdown 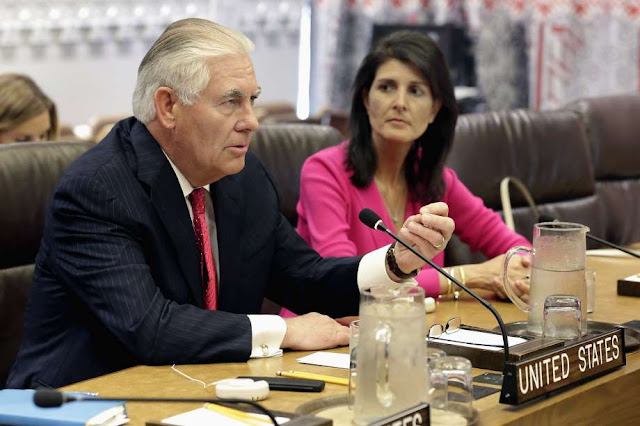 Nikki Haley on Jerusalem: ‘All Due Respect.’

It is just amazing that in such a context, any secretary of state — in the event it was Secretary Tillerson — would fetch up in the new administration plumping to keep the embassy in Tel Aviv. Yet that is what Ambassador Haley reports was the case. Within six months of becoming ambassador, she writes, Jerusalem emerged as a point of contention within the cabinet, with dissenters asserting that the move would beget violence.

Ms. Haley writes that “one White House official” attempted to “enlist” her “in convincing the president to back off his promise.” Writes she: “I refused, because I wanted the president to go ahead with it.” Resistance continued. “In every meeting of the president’s cabinet and national security advisors, there was a faction that seemed to think they, not the president, should make the final decision when it came to policy.”

“They thought they could team up and spin the president — and they tried. Some, like Secretary of State Tillerson, seemed to be thinking primarily about how the decision would affect their reputations. He declared in the middle of the meeting that he wanted to be on record opposing the move.”

He ended up on the same side of the issue as Al-Qaeda and Hamas, as well as President Macron, Prime Minister May, and Chancellor Merkel.

Tillerson was a perfect reflection of most of official Washington: Unimaginative and wrong.

WITH ALL DUE RESPECT?

HOW MUCH IS DUE?

They thought they could team up and spin the president

Treason in a very real sense.