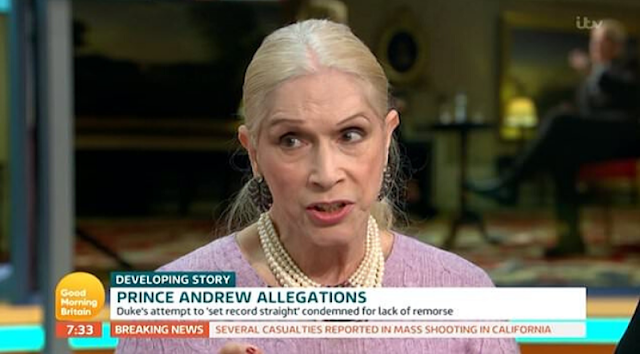 In her defense of the disgraced prince, Campbell pointed to the “prostitution” charge that Jeffrey Epstein was convicted of in 2008, and attempted to downplay the fact that the girls were underage by suggesting that he was simply hiring sex workers.

You all seem to have forgotten that Jeffrey Epstein, the offense for which he was charged and for which he was imprisoned, was for soliciting prostitution from minors. That is not the same thing as pedophilia,” Campbell told a shocked panel Monday morning.

“If you solicited a 14-year-old for prostitution, you’re a pedophile. You’re procuring an underage girl for sex. That’s what he was convicted of. I’m sorry, I’m sorry, with respect, that is nonsense.”

Campbell then immediately attempted to backpedal, claiming that a distinction must be made between a minor and a child.

“Was he? 14? Well, I’m not justifying Jeffrey Epstein. Pedophilia, I suspect there’s a difference between a minor and a child,” she said.

Back in the 80s we knew of a high ranking military officer and cult leader who deliberately molested children from his base to effect a shakeup in the personnel there by getting the parents re-assigned. It wasn't "pedophilia". But it was still raping little kids. And if Randy Andy's forcing himself on 14-year-olds wasn't "pedophilia" it was still raping little girls.

I don't know if you're being ironic, or if you're making some fine point, but it is pedophilia.