Something To Be Thankful For: The Entire Democratic Party Having a Nuclear Meltdown 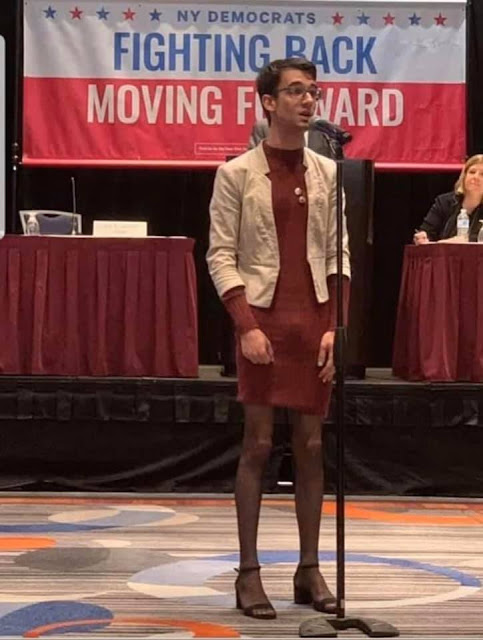 I noticed the other day that my hospital had a headline about "women doctors". I guess female doctors does not work because now some "women doctors" have public water works like this poor delusional man.

"Gender fragmentation" reveals the weakest, most maleable minds amongst us.

It really is true that anyone who buys into this transgender nonsense really is revealing that they have malleable minds, and even worse that they are essentially TRAITORS to reality. They are willing to sell reasonable people down the pike for lies if they are coerced.

The image posted - also shows a lifestyle of extreme narcissism. Some of you will recognize the anonymous post because of my following comment.

My husband is a T-10 paraplegic. Our adults sons will at times make a reference to "half man" becuase that is how he will at times refer to himself. But they do it with a smile, remembering that this is the man who backed them up against a wall as teenagers and threatened them when they sniped and smart-assed with me.

He is anything but a half - he is macho and fully "man". Rather than focusing on himself 24/7 and thinking "what is wrong with my body!?" he has:

* Taught his wife to shoot a rifle and done the same for his sons.

* Mows the lawn and plants a garden every year.

Compare my husband to the ambulatory men in dresses who constantly worry about knowing what is wrong with their bodies, constantly bitching and asking others to acknowledge that God made a mistake.

Nope. They are extreme narcissists. And I wonder how the hell that man in the image manages to mow his lawn, plant a garden, or shoot a rifle.

Yes, I agree. It is extreme narcissism as well.

I love and appreciate that our commenters are tearing apart the Transgender ideology/behavior from every direction. It is a disgusting and evil ideology.

Again, as I have said before, I do not mind what people choose to do with their lives. It's when they decide to force it on others that I get angry.