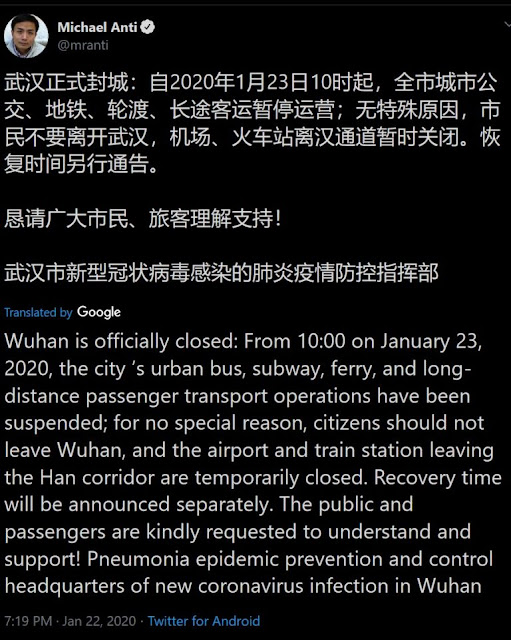 Considering what Totalitarian regimes have done in the past - isolating and murdering entire populations - the above notice is ominous to the extreme.

Vlad Tepes Blog has a lot of important information on this story, including this:

A researcher with ties to China was recently escorted out of the National Microbiology Lab (NML) in Winnipeg amid an RCMP investigation into what’s being described as a possible “policy breach.”

Dr. Xiangguo Qiu, her husband Keding Cheng and an unknown number of her students from China were removed from Canada’s only level-4 lab on July 5, CBC News has learned.

A Level 4 virology facility is a lab equipped to work with the most serious and deadly human and animal diseases. That makes the Arlington Street lab one of only a handful in North America capable of handling pathogens requiring the highest level of containment, such as Ebola.

Security access for the couple and the Chinese students was revoked, according to sources who work at the lab and do not want to be identified because they fear consequences for speaking out. Sources say this comes several months after IT specialists for the NML entered Qiu’s office after-hours and replaced her computer.

Her regular trips to China also started being denied.

MEANWHILE, China is blaming the outbreak on Bat Soup.
Posted by Pastorius at 1:01:00 pm

Check out my third link: The world of transmission.

My concern? NYT states the incubation period may be two weeks. If true, checking arriving passengers from China may prove medical futility.

Cleared for movement into all of our public spaces and public transportation hubs.