DOES THE VACCINE CAUSE VARIANTS? The Ronacoaster, Once You Get in the Vaccine Car You Ain’t Getting Off Until The Ride’s Over

This article, from The Conservative Treehouse, claims that the vaccines cause variants to arise through mutations in response to the vaccines. From the very little I know of immunology and mutations, that makes sense. I have now seen this claim made by multiple people in multiple forums over the last few months.

If this is true, then we are going to watch an endless disaster unfolding over the next few years. This seems to be borne out by the fact that the head of Public Health in Australia is saying we will need vaccine boosters "into the future", while Israel is telling it's citizens they now need a "fourth booster."

People eat this stuff up. I have been watching it among people I know personally. I know a few people who were vaccinated, got COVID, and said, "I guess I need the booster."

This makes no sense to me whatsoever. If the first one didn't work, why take the new one?

But I am a Deplorable, so what do I know?

Here's the article from the Conservative Treehouse:

For several months I have been dispassionately following multiple data-streams about the SARS-CoV-2 virus, aka COVID-19, the vaccinations and the variants.  Just following data; just following discussions of data; just looking at public statements by those who generate information about the data.  All of it from a generally ambivalent position, willing to hear, review, contemplate and give consideration to any possibility.

♦ Should I get Vaccinated? – Like a bubble on a level, the outcome of analysis sometimes goes in one direction, sometimes goes in the other.  However, for approximately 8 weeks the level has tilted.  While there is still a possibility something drastic might change the big picture outcome, the weight of the data is only going in one direction now.

A recent public release from the Los Angeles County Public Health department [link here] is yet another data-point in an assembly of larger data-points, but it is time to accept that alternative data-points are not likely to tilt the analytical level back in the pro-jab direction.   It seems innocuous, but look at the highlight within the statement: 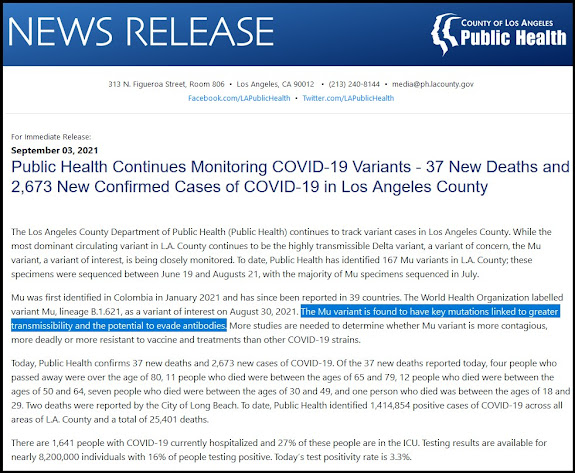 Essentially, the LA public health officials are stating the exact same thing that Dr. Anthony Fauci said last Sunday on CBS Face The Nation.   The Mu variant is showing greater infectious transmissibility, and simultaneously the data shows this variant -yet again- has an ability to evade the vaccine induced specific antibodies.

The Delta variant had the same set of traits as described above for Mu.   Greater transmissibility, greater ability to avoid vaccine induced antibodies, but less deadly than the original virus.  This mutation (ie variant) is why vaccinated persons were later discovered to be capable of being infected (with higher loads of virus) and transmitting or shedding the variant at higher levels.  Thus, the need for a booster to target the Delta variant (shot 3).

The Lambda variant had the same set of traits as the Delta variant.  Greater transmissibility, greater ability to avoid vaccine induced antibodies, but less deadly than the Delta strain.  This mutation (ie variant) is why vaccinated persons (2 shots) who also had the booster (shot 3) were capable of being infected and transmitting the next variant.  Thus the need for booster shot 4 (see Israel).

The Mu variant now has the same set of traits as the Lambda and Delta variant.  Greater tranmissibiltiy, greater ability to avoid vaccine induced antibodies, but likely less deadly than the Delta and Lambda strain.   It is yet to be determined if booster shot 5 will be needed (Israel beta-test), or if BigPharma can blend, or as Dr. Fauci stated Sunday “mix and match”, vaccine ingredients from Delta and Mu into one mRNA booster in the U.S. which would technically be called booster one (shot three).

Bottom line, the vaccine makers are chasing variants and modifying the “vaccine” shots to keep up.

The COVID-19, SARS-CoV-2, virus was created in a lab.  The vaccine was created to address that virus. However, the vaccine created variants.  The variants require boosters…. which generate variants…. which require boosters…. which generate variants.   It seems like one long ronacoaster that you get locked into once you take the vaccine, and you ain’t getting off until the strain of the variant gets so weak that it no longer requires a booster to chase it.

If you accept the virus was created in a lab, then this quest to chase its variants does actually make sense.

This was the warning message sent out by renowned vaccine researcher Geert Vanden Bossche [SEE HERE], who received his DVM from the University of Ghent, Belgium, and his PhD degree in Virology from the University of Hohenheim, Germany.  Dr. Bossche sent an early warning letter about this exact scenario to the World Health Organization.  [pdf LETTER HERE].

Dr. Bossche is not alone in his research and opinion.