This young comedian @nicknemeroff died in his sleep at 32 from Sudden Adult Death Syndrome..he was fully committed to his comedy 100% pic.twitter.com/5fziL80Xbe 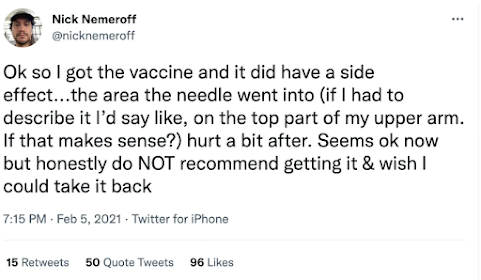 His cause of death has not been revealed yet. His manager, Morgan Flood of Grand Wave Entertainment, told CBC News that he has no information yet on the cause of death but that Nick “died in his sleep.” Funeral arrangements are yet to be announced.

Back in 2021, Nick posted a tweet about having a side effect following his Covid-19 vaccination.

“Ok so I got the vaccine and it did have a side effect…the area the needle went into (if I had to describe it I’d say like, on the top part of my upper arm. If that makes sense?) hurt a bit after,” he wrote. “Seems ok now but honestly do NOT recommend getting it & wish I could take it back.”