THEY SAY THAT LIKE IT'S A BAD THING: “It’s a way for Republicans to tell people that they can have back control of their lives.” 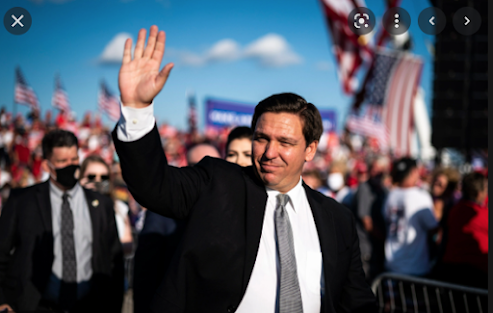 The New Yorker just ran its second big negative piece on Ron DeSantis in a week, proof of how much the woke media fears the governor of Florida. (Yes, I read the New Yorker so you don’t have to.)

The article is nominally about DeSantis’s support for age-appropriate teaching of gender and sexuality in public schools. Or, as the Democrats like to call it, “Don’t Say Gay.” The wokesters have not figured out that label is not quite the devastating comeback they think.

Plenty of parents of six-year-olds are fine with not having teachers say “gay” - they think that even if they support same-sex marriage (as I do), they and not outsiders should decide what their first- or second-graders hear about sex and family structures. Then again, these are the people who thought “defund the police” was an electoral winner, so their political instincts may not be the best.

But I digress, briefly. As you would expect, the article treats DeSantis as a political opportunist. But, unlike most woke media reporters these days, the author actually took the time both to talk to conservatives who support DeSantis’s views and to try to understand why those views are gaining so much ground right now. (As opposed to just repeating Fox News misinformation racism misogyny America is the worst endlessly.)

The result was something close to the truth - and the best explanation I have seen for the way Covid continues to drive our politics, even if no one is talking about it anymore. I urge you to read these three paragraphs - especially the sentence I have bolded - closely:

When I asked Republican activists and operatives about the rise of the school issues, they told a very similar story, one that began with the pandemic, during which many parents came to believe that their interests (in keeping their kids in school) diverged with those of the teachers and administrators. As Roberts, the Heritage Foundation president, put it to me, parents who were in many cases apolitical “became concerned about these overwrought lockdowns, and then when they asked question after question, there was no transparency about them, which led them to pay more attention when their kids were on Zoom. They overheard things being taught. They asked questions about curricula. They were just stonewalled every step of the way.” The battles regarding the covid lockdowns, Roberts told me, opened the way for everything that came after. “This is the key thing,” he said. “It started with questions about masking and other aspects of the lockdowns.”

Both parties right now are trying to answer the question of how fundamentally covid has changed politics. “From 2008 to 2020, elections were decided on the question of fairness—Obama ’08, Obama ’12, and Trump ’16 were all premised on the idea that someone else was getting too much, and you were getting too little, and it was unfair,” Danny Franklin, a partner at the Democratic strategy firm Bully Pulpit Interactive and a pollster for both Obama campaigns, told me. But the pandemic and the crises that followed (war, inflation, energy pressures) were not really about fairness but an amorphous sense of chaos. “People are looking for some control over their lives—in focus groups, in polls, once you start looking for that you see it everywhere,” Franklin said.

Both parties had shifted, in his view. Biden had sought to reassure Americans that the government, guided by experts, could reassert its control over events, from the pandemic to the crisis in energy supply. Republicans, meanwhile, had focussed on assuring voters that they would deliver control over a personal sphere of influence: schools that would teach what you wanted them to teach, a government that would make it easier, not harder, to get your hands on a gun. A moral panic about gender identity might seem anachronistic, but it served a very current political need. Franklin said, “It’s a way for Republicans to tell people that they can have back control of their lives.”